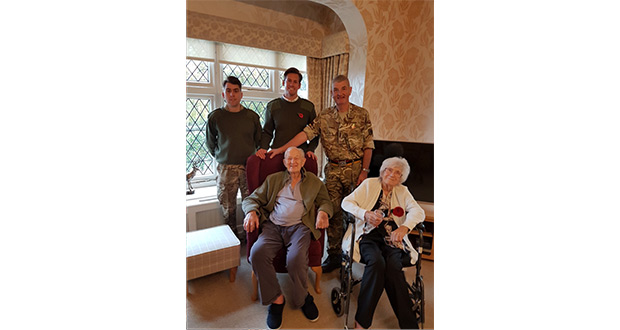 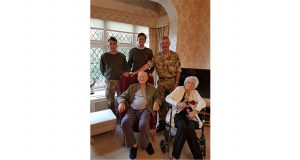 On the 09th November, the Queen’s Own Yeomanry (QOY) Army Reserve based in York, paid a very special visit to St John’s House Care Home in Kirk Hammerton. to meet a very special gentlemen, Sgt William Joynson at the ripe old age of 92. The purpose of this visit was to present Sgt Joynson with a ‘War Medal 1939-1945’ which he never claimed, until now – 73 years after!

Sgt ‘Bill’ Joynson originally started life as a farmer, but when the call came, like many of his friends he knew he had to ‘do his bit’. He started training with the Kings Own Scottish Borderers before being shipped off to join the 2nd Battalion The Durham Light Infantry (DLI). Whilst serving with the DLI, Bill had the amazing opportunity to serve abroad and work with the War Crimes Court in Malaysia, where his job was to collect and escort prisoners to their trials.   Bill was also part of the advance party that arrived prior to the liberation of the infamous ‘Changi Jail’ with vivid memories of the gallows and execution yards.

“I remember standing outside with the Japanese stood on one side of the street, all in a line just with bayonets ready. We were stood facing them on the other side, hoping all would go smoothly. It was certainly a tense and nervous time.”

Bill served with the DLI for only a short period of time but manged to reach the rank of Sgt, a far cry from his humble farming days, but he never claimed his war medal, until recently when the Queen’s Own Yeomanry became involved.

After a visit to the barracks on a day out from the care home, Sgt Bill was chatting to LCpl Stephen Dixon (QOY), about his time in the DLI and when asked about his medals he mentioned he had never received any. LCpl Dixon then set about enquiring with the Ministry of Defence Medal Office to see if Bill was eligible, and submitted the paper work. A few weeks later, the medal arrived in the post!

“I am so very proud of this medal, it does bring back a lot of memories good and bad. But I am very proud!”

Sgt Bill should be receiving a few more in the post in the next few weeks as well which will truly honour his service during World War II.

Sgt Bill Joynson is also the nephew of a very famous soldier from the North East – Pte Tom Dresser, a Victoria Cross Recipient! On 12 May 1917 near Roeux, France, Private Dresser, despite being wounded twice on the way and suffering great pain, succeeded in conveying an important message from battalion headquarters to the front-line trenches, which he eventually reached in an exhausted condition.

“I remember my seeing a picture of my uncle outside the Palace with his family after being awarded the VC. He still had his arm in a sling! He was a great man, a genuinely nice man who I was very fond of, and one my mother spoke very highly of. It was because of him really and his inspirational story that I decided to join”

Capt Tim Miller from the QOY said “It was an absolute honour to meet Bill and the other residents at St John’s House, especially with Remembrance Day over the weekend. Several of the residents had some great stories of their times during the war and it was incredibly humbling to hear about the struggles and hardships of my grandparents generation, one which we will never truly understand!