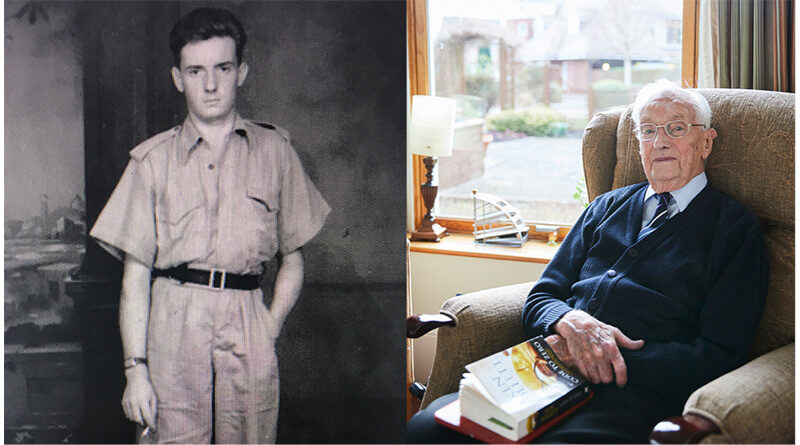 A Navy veteran has recounted the ‘suicide trip’ he was about to embark on near the coast of Burma before Victory in Japan (VJ) Day.

Harry Southern was speaking ahead of the 75th anniversary of VJ Day on Saturday 15 August, which brought an end to WWII.

The 95 year-old, who now lives at Royal Star & Garter in Solihull, was a Leading Seaman serving on a small 18-man motor launch (ML). They were preparing for a deadly mission off Burma when atomic bombs dropped by American forces on Hiroshima and Nagasaki forced the Japanese surrender.

Mr Southern said: “We were there to harass the Japanese and support the Army as necessary. They needed people moving and we moved them around. I remember one time in Burma the Second Lieutenant was shot by a sniper. We got him into a helicopter as soon as we could. He was alive when he left us, but I don’t know what happened to him. It was a little bit unusual for someone in the Navy to be shot with a rifle. I was aware it could have been me on the end of that sniper’s bullet.”

On VJ Day, Harry was in Trincomalee in Ceylon (modern day Sri Lanka), where his ML was having a refit. It was the vessel he served on throughout his time in the Far East, and had a crew of 18. Harry said: “The reason for the refit was to have sound amplifying equipment installed which would make the noise of an armada out at sea. The idea was we would cause a diversion to the Japanese, who would think there was an invasion coming down the west coast of Burma. And the diversion would obviously embarrass them because it was maybe three vessels playing gramophone records, just three 18-man crews involved. We were putting ourselves in a great deal of danger. You could regard it in some ways as a suicide trip. If they investigated, we were in trouble. But the bombs dropped and the refit was stopped.”

Any relief Harry may have felt was soon tempered by the devastation caused to Hiroshima and Nagasaki. He said: “I can’t say if I felt relieved [on VJ Day]. I was out there nearly another nine months before I was drafted home. And we didn’t know the extent of death and destruction it caused. That filtered through later.”

Harry celebrates his 70th wedding anniversary with wife Sue on 12 August. Sue remembers the end of the war: “It was summer and I’d finished teacher training at the college. It was a summer of leisure as far as I was concerned. We thought ‘Thank goodness that’s over, thank goodness it’s finished’. All my relatives who had been in the services during the war had returned home safely, and Harry’s two brothers were home safely. So we were lucky that we didn’t actually lose anybody.”