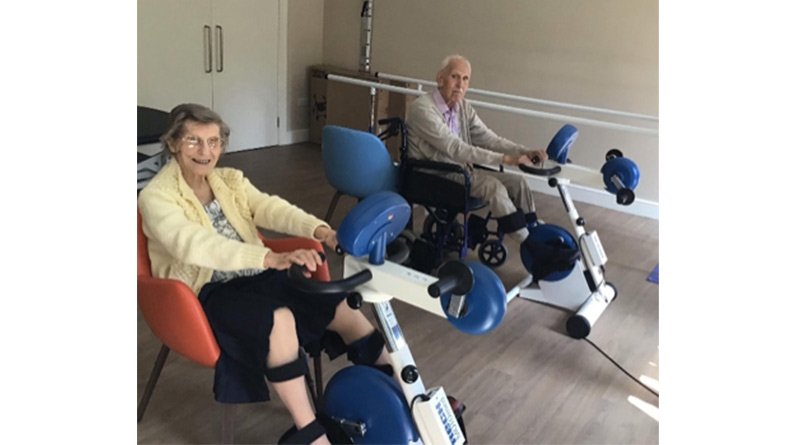 Residents and staff at Royal Star & Garter in High Wycombe are taking part in a virtual cycle covering the length of Great Britain.

They are pedalling the 874 miles from Lands’ End to John O’Groats on static bikes based in the Home’s in-house Physiotherapy Room.

They aim to cover the distance in three weeks, and raise £874 for Royal Star & Garter, a charity which provides loving compassionate care to veterans and their partners living with disability or dementia.

Around 15 residents will take part, including John, a 93-year-old World War II veteran who served in the Grenadier Guards, and 101-year-old Ena, whose husband was killed in action in Belgium in 1944. Residents and staff will cycle 15-minute sessions and will aim to cover 55 miles a day.

Ena said: “It will be fun, and I hope we raise a lot of money. This Home is second-to-none.”

Staff will track the progress as they make their way across the country on a map. Meanwhile residents will enjoy local delicacies from the area they’re passing through, including Cornish pasties, Devonshire cream teas, Somerset cider and Lancashire hotpots.

There will also be quizzes on the regions they’re cycling through, and a look at some of Britain’s iconic landmarks, such as Stonehenge.

The event is being jointly organised by the Home’s Activities and Physiotherapy Teams. Activities Manager Hayley Helsdown said: “We’re doing this to raise awareness for the Home and funds. It seems appropriate to launch the challenge during Armed Forces Week as we celebrate our veterans. The residents are really looking forward to it and love the idea of helping raise money for our charity.”

The Home hopes to complete the High Wycombe Tour of Britain before Friday 10 July.