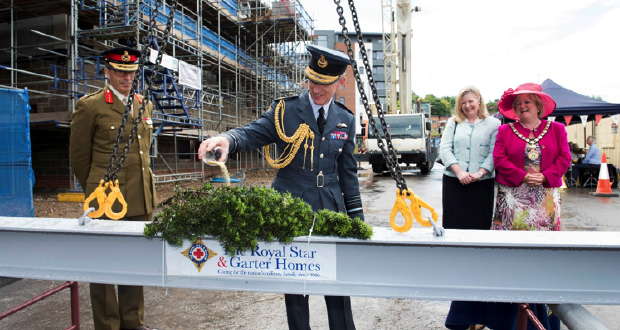 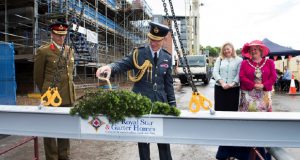 A new home caring for disabled veterans in High Wycombe reached an important construction milestone when the ‘topping out’ ceremony marked the building reaching its full height. The Royal Star & Garter Homes welcomed distinguished guests including The Rt Hon The Earl Howe, Minister of State for Defence, and Air Chief Marshal of the Royal Air Force, Sir Stephen Hillier, who led the ceremony.

Sir Stephen Hillier was met by the Charity’s Chairman, Major General Tim Tyler, and Chairman of Wycombe Council, Councillor Suzanne Brown. Sir Stephen was invited to carry out the traditional Saxon ritual of anointing a yew tree branch attached to the last roof beam with wine, oil, corn and salt symbolising wisdom, liberty, prosperity and hospitality. The beam was then hoisted into its final position.

Defence Minister Earl Howe commented: “Our veterans have given a huge amount to this country, and this charity is a great example of the country giving back. Charities play an important role in caring for our veterans, and I would like to extend my personal thanks to The Royal Star & Garter Homes for their ongoing support.”

Air Chief Marshal Sir Stephen Hillier remarked, “I’m delighted to be able to give my support to the Charity, especially in High Wycombe, which already has so many other important connections with the Royal Air Force. The Charity sets the standard in nursing and dementia care. I’m confident the High Wycombe Home will continue to deliver award-winning care as per the Charity’s existing Homes, as well as drawing on new innovations and thinking.”

“We are delighted to be bringing our brand of specialist care to the veterans living in the Buckinghamshire area,” said The Royal Star & Garter Homes’ Chairman, Major General Tim Tyler. “We are also extremely proud to be bringing new life to a brownfield site and to bring new jobs and sustainability to the local community, which we look forward to engaging with as the Home moves towards opening. The new Home will mean that we can provide specialist care for even more veterans in their time of need.”

Also in attendance was Mrs Jules Bendell, widow of Wing Commander Anthony ‘Bugs’ Bendell, who ranked amongst the RAF’s most talented fighter pilots of his generation. A former resident of the Charity’s Surbiton Home, Bugs was due to be one of the first to move into the High Wycombe Home so he could be closer to family. Speaking about her late husband, Mrs Bendell commented, “Bugs would have been very proud of the care The Royal Star & Garter Homes will be providing to the military veterans living in South Buckinghamshire and the wider area.”