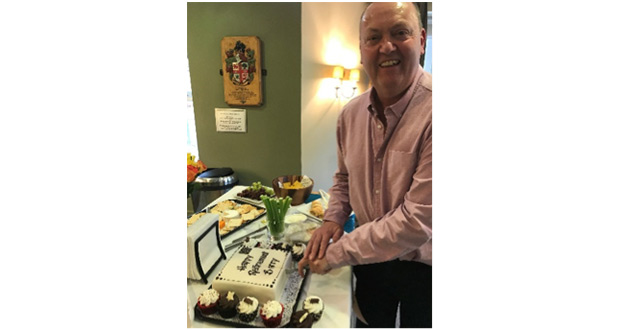 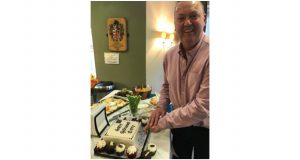 The Royal Star & Garter Homes has bid farewell to its longest serving member of staff.

Health Care Assistant Barry Maunder has retired after 45 years with the Charity, which cares for ex-Servicemen and women and their partners living with disability or dementia.

The 65-year-old completed his final shift at the Home in Surbiton last week and was given a rousing send-off with a leaving party on Friday, 15 February.

Barry first joined The Royal Star & Garter Homes in 1974, aged 19, working at the iconic Richmond Home. He said: “I saw an advert in a local newspaper and applied as a carer, but back then it was known as a ward orderly. And I’ve been a carer all my life.”

During his time with the Charity, he has accompanied residents to the Wimbledon Tennis Championships, Buckingham Palace and on holidays. He has met members of royalty and also famed neurosurgeon Dr Ludwig Guttmann, who launched the forerunner to the Paralympic Games in 1948 with an archery competition between disabled men at Stoke Mandeville Hospital and the Star & Garter team.

Barry, from Richmond, has been working night shifts since 1989 and said: “I’m looking forward to going to bed at a normal time! But in all honesty, I’ll miss the job. I’ll miss the residents and the people I work with. There’s been happy memories and sad memories, but I’ve loved every minute of it. I will definitely be back to visit.”

Giving advice to anyone thinking of embarking on a career in care with The Royal Star & Garter Homes, which is recruiting for its third Home in High Wycombe ahead of its opening in April, Barry added: “It’s a very rewarding job. Just do the best you can for each resident, and understand that they’re an individual and a person, whatever disability they live with.”

Emrys Owen has worked for the charity for 36 years. Barry was one of the first members of staff he met when he started in 1982. He said: “When I first started I shadowed Barry for two weeks, he showed me the ropes. He’s been a good worker and we will miss him. It won’t be the same without him.”

Director of Care Pauline Shaw paid tribute to Barry’s dedication to caring for ex-veterans. She said: “We have been lucky to have Barry’s help in caring for our residents for 45 years. Residents and staff will miss him enormously but we are grateful for his dedication and wish him a happy, long retirement.”