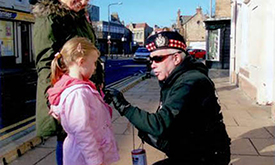 An Army veteran – who was shot in active service – has lead a charge to raise funds for UK military charities Help for Heroes and Combat Stress.

Kevin Simpson, a resident at Bield’s Milton Court, teamed up with close friend John Rose, who was awarded the Military Cross in 2003 for acts of bravery in Iraq, to organise a Colossal Cake sale at the Edinburgh development.

John, who lives opposite Bield’s Southfield Court in Dunbar, helped to promote the event in East Lothian while Kevin encouraged tenants at Milton Court to get involved. Together they managed to raise a staggering £1300 for Help for Heroes

Kevin also raised another £1215 from a “BEAR-BQ” barbeque summer fundraising event and a “Shop in a Box” sale at Milton Court – with all the proceeds going to Combat Stress.

Kevin, who served with the King’s Own Scottish Borderers First Battalion formally known as the Edinburgh Regiment, before moving into Milton Court in 2013, was shot when he was 21 while on a military tour in East Berlin.

He said: “What happened to me is what motivates me to support these military charities. I am fit and well now so I like getting out and doing all I can to help.

“Fundraising can be difficult sometimes, but when it goes well it is really rewarding.

“Everyone in Milton Court got involved in the Colossal Cake sale, and with John’s help the momentum spread and residents down in Dunbar got involved as well.

“I’m delighted with the amount of money we have raised.”

Bield operates a ‘Free to Be’ philosophy which lets people make their own choices about how they live their lives while being there to support them when they need it. So Bield staff put all their efforts into helping Kevin host fundraisers to raise money for charities close to his heart.

To say thank you for their fundraising efforts, Help for Heroes sent a certificate of appreciation to Kevin.

Kevin has also planned other fundraising events which will take place in between now and the end of November.

This is not the first time Kevin has fundraised for this cause as he has previously done 2 parachute jumps from which he raised over £1000 for Help for Heroes and Combat Stress.

Kevin said: “I have a close relationship with Help for Heroes and Combat Stress and they are always phoning me and asking me what I am going to do next.

“I am so grateful that so many people get involved in my fundraising ventures and donate money.”