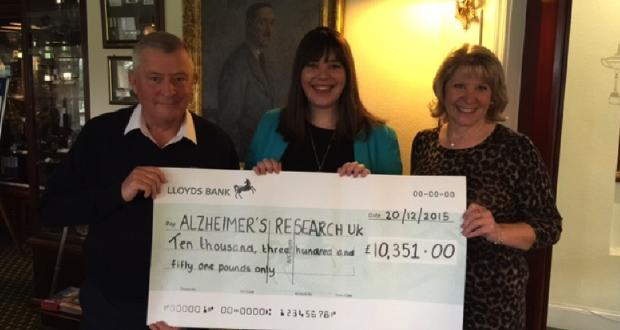 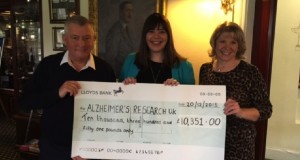 A year of fundraising at Verulam Golf Club, in St Albans, has raised £10,000 for Alzheimer’s Research UK, the UK’s leading dementia research charity.

Over the months, club members have pulled together to support numerous events to boost funds for the charity’s vital work to defeat Alzheimer’s disease and other forms of dementia.

Jeannie Taylor, from St Albans, who served as Ladies’ Captain during the past year, talked about the club’s motivation for supporting Alzheimer’s Research UK:

“When the Club Captain and Ladies’ Captain are elected annually in November, they each have the privilege of nominating a charity to benefit from fundraising activities. I chose Alzheimer’s Research UK because nearly everyone I speak to these days seems to know someone affected by this disease and other dementias. I was delighted when the elected Club Captain, Richard Bird, decided to support the charity too.

“We’ve had a lot of fun raising money while doing something positive to help Alzheimer’s Research UK progress its vital work. Our many different fundraising activities included charity golf days, dinners and a mini auction. They were all very popular and people were so generous giving prizes and donations.

“The prize of a week’s holiday in a villa on the Costa del Sol raised a huge amount, as did a signed Arsenal football shirt and the novel idea of winning a car park space for a year at the club. It was all very worthwhile and the amount we raised far exceeded our expectations.”

Richard Bird, who also lives in the city and was Club Captain during the past year, said:

“We’ve all made a determined effort to raise as much money as possible for Alzheimer’s Research UK. It’s a cause that’s touched a chord with so many people. My mum, Madeline, died with Alzheimer’s four years ago. She was 92 and had lived with the disease for six years. Although we visited her all the time, she’d insist we hadn’t been to see her for weeks. My mother-in-law, Olive, has also received the same diagnosis and although she’s in her 90s she keeps asking where her children are.

“Dementia doesn’t just affect individuals, it impacts on everyone around them. It’s good to know the money we’ve raised throughout the year will help Alzheimer’s Research UK find the treatments so urgently needed to stop this disease in its tracks.”

“We are hugely grateful to everyone at the Verulam Golf Club for their outstanding fundraising efforts during the past year. Raising £10,000 is an amazing achievement and will bring our scientists closer to finding treatments that will change the lives of people living with Alzheimer’s disease and other dementias.

“There are 850,000 people across the UK living with dementia, including over 14,000 people in Hertfordshire. Research has the power to defeat dementia and Alzheimer’s Research UK is leading the charge. We rely on public donations to fund our research and it’s thanks to people like Jeannie, Richard and fellow members at the golf club that we can provide crucial resources to our scientists and fund world-class research, driving the next breakthrough.”