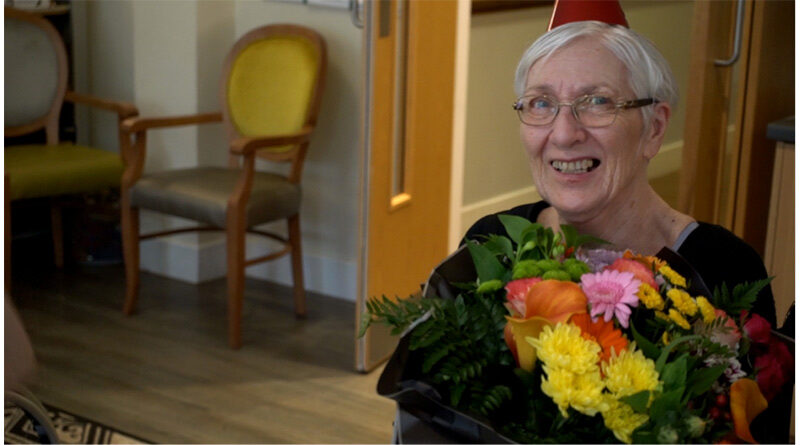 A group of residents, who are in rehabilitation for life changing brain and spinal cord injuries, are celebrating this month having successfully completed a triathlon challenge that saw them collectively swim, cycle and walk over 54km.

Amongst the group of six were 74-year-old Jean Hall and 80-year-old Jill Complin, for whom – as a former competitive swimmer – the challenge had special significance.

Jill is in recovery following a stroke in December 2019, which left her with impaired mobility and unable to communicate. Her injuries have been particularly upsetting for her and her family as Jill had been extremely active prior to the stroke, competing regularly in swimming championships across the country. Jill even held British and World Records at master’s level, with her most recent medal being awarded at the London 2016 European Masters Swimming Championships, where she claimed the top spot on the podium in the 75-79 Years 800m Free category, touching in at 14:29.94.

Inspired by Jill’s impressive swimming history, as well as her sheer determination to improve her walking throughout her rehabilitation journey, residents at CHD Living’s Kingston Rehabilitation Centre took on the challenge of completing a triathlon in her honour. Slightly modified due to their injuries, the challenge consisted of collectively walking 12.75km, cycling 41.7km and swimming 160m, and took the residents just over a month to complete.

Speaking of the success, Alex Barton, Rehabilitation Assistant at Kingston Rehabilitation Centre, said: “This was such a fun challenge to be involved with! We found a way for each of our residents to contribute to the Triathlon totals, whether that be using the bike with their upper limbs or supported standing because they are unable to walk. Rather than only focussing on their individual rehab goals in therapy, this gave all involved a common goal that they were really motivated to work towards to achieve together!”

“Following a remarkable recovery, Jill will shortly be discharged back home after almost a year away, and what a high for her to end her journey with us on! Whilst we will be sad to see her leave us, we are so proud of the hard work she has put in, and the achievements she has made to enable her to safely return home,” Alex concluded.