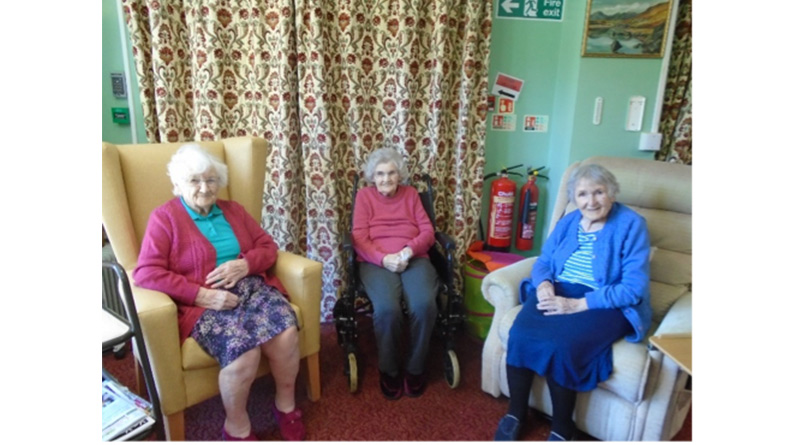 Families up and down the country are counting down the days until they will be able to sit down together, enjoy a meal and catch up on old times, but for three elderly sisters from Powys, the moment arrived slightly sooner than they would have expected.

94-year-old Gwenora Evans, recently moved to Llwyn Teg care home in Llanfyllin, one of 12 homes run by Shaw healthcare on behalf of Powys County Council. For the next 14 days, in accordance with Public Health Wales guidelines, she was confined to her room, visited only by members of the care team. But this week, staff laid a special table for three, as Gwenora was finally reunited with her two sisters, Ceinwen (95) and Megan (91), both of whom are Llwyn Teg residents.

Mother-of-five, Gwenora, remained an active lady and keen gardener well into her 90’s, but when her health deteriorated earlier this year, her family could no longer give her the care she needed. After recently being admitted to hospital, they started making arrangements for her to move into Llwyn Teg, but the ongoing Coronavirus situation presented them with a real dilemma.

“Although we knew that mum would receive fantastic care at Llwyn Teg, we wanted to be sure that we were doing the right thing and that all the proper precautions were being taken,” said Gwenora’s daughter-in-law, Jackie Evans. “We had long discussions with the manager and the local health board until we were convinced that all the possible safeguards were in place before making the final arrangements. She had two tests COVID-19, both coming back negative, and then went into isolation in the care home. All through the process, mum was adamant that it was what she wanted to do and being able to spend quality time with her two sisters has given her something positive to focus on.”

“The two sisters have been a special part of our community here and they always love sitting and eating meals together,” said Jane Humphries, manager of Llwyn Teg care home. “Although we have arranged lots of video calls, they’ve both really missed having visits from their family, so to have their sister around will be real boost, and I’m sure that Gwenora will fit in really well.

“It has been a very anxious time for both residents and staff, but our team has done a fantastic job of keeping everyone’s spirits up and looking for the positives every day. To have three sisters, all in their 90s and all living under the same roof at this stage of their lives is not something that happens very often, so we are happy that we have been able to make it happen.”