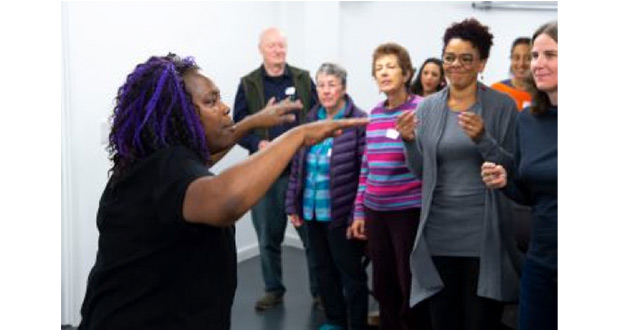 GPs should prescribe participation in communal singing activities to patients to raise self-esteem and overcome loneliness, a tuneful event at the University of Sussex was told this week.

Dr Sarah Andersen, a practicing GP and former masters’ student at the Brighton and Sussex Medical School, told the Singing for Wellbeing event held at the University of Sussex that academic studies indicated significant benefits if more doctors used community choirs as part of their social prescribing.

Dr Andersen said that involvement in community choirs had been shown to improve health outcomes, alleviate the negative impact of social isolation and loneliness, lift up individual’s self-esteem and be an effective alternative to anti-depressant drugs in some cases.

Scores of singers, university academics and doctors took part in Wednesday’s event, held at the Attenborough Centre for the Creative Arts and hosted by the University of Sussex’s Centre for Innovation and Research in Wellbeing (CIRW), where they had a chance to sing together, led by Worthing’s Spring into Soul community choir director Siggi Mwasote, and listen to expert insight into the benefits of membership in a communal choir.

Dr Andersen is GP at Herstmonceux Integrative Health Centre which hosts choir sessions in its own practice building. She is also a director at Brighton-based social enterprise Futurehealth which champions tailor-made and empowering healthcare.

She said: “Research studying more than 300,000 people over seven years found that people with complex social connections, such as belonging to a choir or being part of a team, lived 50% longer than those that didn’t. That is the same health benefit of choosing not to smoke so the health implications are real and hugely significant.
“We are in a slow burning crisis. Last month Public Health England reported that in a single year, 1 in 4 adults in the UK were prescribed sleeping tablets, strong painkillers including opiates, or anti-depressants.”

Charles Watters, Professor of Wellbeing and Social Care at the University of Sussex and CIRW director, said: “This exciting event has demonstrated the powerful impact singing and, in particular, participating in singing groups can have on people’s wellbeing.
“In putting on this event, our centre seeks to showcase important innovations and to demonstrate the ways in which research agendas are being reshaped. The new era of social prescribing offers unprecedented opportunities to transform our practices and understandings of ways to enhance wellbeing.”

Attendees learned about Dr Andersen’s new study, presented publicly for the first time, which highlights the importance of singing in helping women build a sense of solidarity with other women.

Dr Andersen discussed how one woman was able to escape from her abusive partner by joining a choir in secret which then led to her finding a new job and a new place to live thanks to the invaluable comradery and support she found in the choir.

Dr Andersen said: “When they sang in harmony with others they felt that it reduced the distance and differences between them and other choir singers and created a really special bond.”

Research carried out by Dr Andersen has revealed choral singing can affect women’s perceptions of their wellbeing in four distinct ways:

(i) through the joy of singing
(ii) experiencing singing as essential for survival – particularly in times of significantly poor health and mental health crisis
(iii) group singing as a route to social connection – enhancing a sense of identity and belonging, and thereby increased self-confidence and self-esteem
(iv) through promoting social inclusion

There are currently more than 2 million people in the UK who sing in a choir on a weekly basis and 45 million in the United States.

An 80-year-old woman from Brighton known as Tree who attended the event on Wednesday, said: “When I was singing I felt in touch with my body and feelings and felt strong and powerful. In one moment I sang lower than others and someone turned round to me as if to say that sounded nice. I enjoyed that and it felt friendly.
“I’m enthusiastic about the idea of social prescribing. As was said in the event, I agree that moving away from giving people medication to social prescribing is a seismic shift, When you think about its perhaps the start of a quiet revolution from clinical medicine to a more holistic and social sense of a person’s wellbeing.”