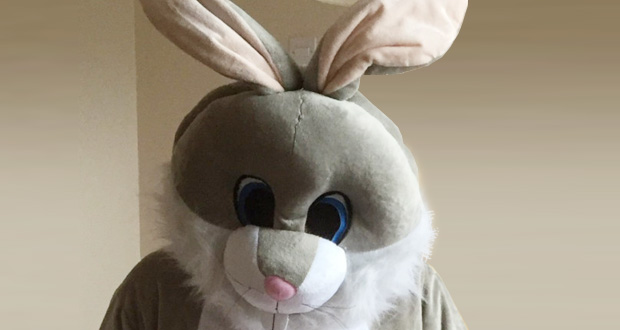 A grandad fed up with being told “life is over” once you’re in a care home has decided to take to the streets as an Easter Bunny to prove you can still have fun at 93.

After reading another “depressing” article in a national newspaper Stanley Bennett decided enough was enough and has planned to dress up as the Easter mascot to raise money for Alzheimer’s Research UK.

Stanley, with the help of his son Ron, will be spreading some Easter cheer at his local Tesco in Saffron Walden, Essex, on Thursday 24 March between 10am and 12 noon.

The pair will be handing out 300 chocolate eggs while taking round a collection bucket on behalf of the UK’s leading dementia research charity, before going round the town centre of Saffron Walden.

The great grandfather-of-two wants to raise awareness for all the “wonderful” care homes, including Stanley Wilson Lodge in Saffron Walden, which he says he has had a great experience with over the last few years.

Stanley’s wife Agnes sadly died with vascular dementia in September 2014, at the age of 91, after being diagnosed 10 years earlier, and lived in the care home before she passed away.

Desperate to stay with his wife, Stanley, who spent his life working as a night printer at The Daily Sketch, decided he too would move into the home – and lived just upstairs so he could see her every day.

Stanley, who still lives in Stanley Wilson Lodge, where the pair celebrated their 72nd anniversary, said:

“I kept reading articles that suggested the quality of care in homes is always very poor and life is over once you’re there.

“But I could not fault the help my wife received, and I’ve been given a new lease of life while living there. And now I want to give something back.

“I want to get out there and spread the word about both Alzheimer’s Research UK’s ground-breaking work, the wonderful care home I live in and most of all I want to make people smile over Easter.

“As well as appearing at Tesco on Friday, I’ll be handing out full-sized Easter eggs to all the residents at Stanley Wilson Lodge on Friday.”

Despite requiring a frame to walk around the home and needing a wheelchair for his collection, Stan’s granddaughter Hannah says he is “larger than life” and very active.

She said: “My nan was a tiny, feisty, Scottish lady. In my grandparents’ relationship she would always take the lead.

“When my grandmother died, instead of sitting in the care home my gramps decided to make the most of life, something which I am so proud of him for.

“I’d like to thank Stanley for getting into the spirit of Easter and cheering everyone up as the Easter Bunny.

“At the moment there are 850,000 people across the UK living with Alzheimer’s disease and related dementias, including more than 20,000 in Essex.

“We rely on public donations and it’s thanks to people like Stanley that Alzheimer’s Research UK is able to continue its pioneering work into finding treatments and preventions for dementia.”