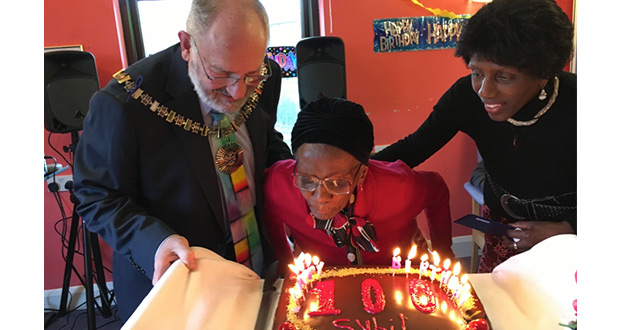 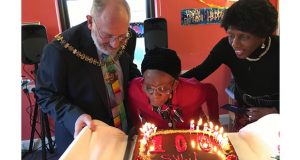 Sybil Sealy enjoyed a special birthday party at Apthorp Care and Activity Centre attended by The Mayor of Barnet, Cllr Brian Salinger, as well as family and friends, to celebrate her becoming a centenarian.

A regular attendee at the centre, run by local care provider and charity, The Fremantle Trust, Sybil was thrilled to be joined by her daughter, June, and to receive her message from the Queen in honour of her milestone birthday.

Sybil was born in British Guiana and raised against a backdrop of wartime conflict and economic hardship. With a lust for life, music and a natural talent for dressmaking, she worked hard to earn a living and save money to fulfil her sense of wanderlust.

In 1950 she boarded the SS Cottica of The Royal Netherlands Steamship Company and ventured to Europe, where she discovered a post-war England that she declared ‘immediately felt like home’.

Sybil excelled at her couture business, making bridal wear and bespoke dresses for a decade until the advent of popular culture, which meant the mini skirt and other new fashions made couture less ‘de rigueur’. She returned to her love of music in the 1960s and, despite suffering a stroke in 1972, trained to become a qualified piano teacher, which she enjoyed as a career until she retired.

Having always had a love of global travel, Sybil has ventured to far-flung destinations such as the Forbidden City in Beijing, the Middle East, Europe and Nigeria, where she was the guest of Osama of Benin and his family.

Fiona Swynnerton, leisure and lifestyle manager at The Fremantle Trust, said: “It was a real joy for us to host a party for Sybil and her loved ones. As someone who contributes so much with her energy, passion and enthusiasm, it was lovely to make  her feel extra special for the day.”

Cllr Brian Salinger, The Mayor of Barnet, added: “Sybil is a true example of someone who embraces each day fully. She embodies the spirit of community that’s so important to enable people to feel fulfilled and empowered, regardless of age. She is an inspiration to us all!”