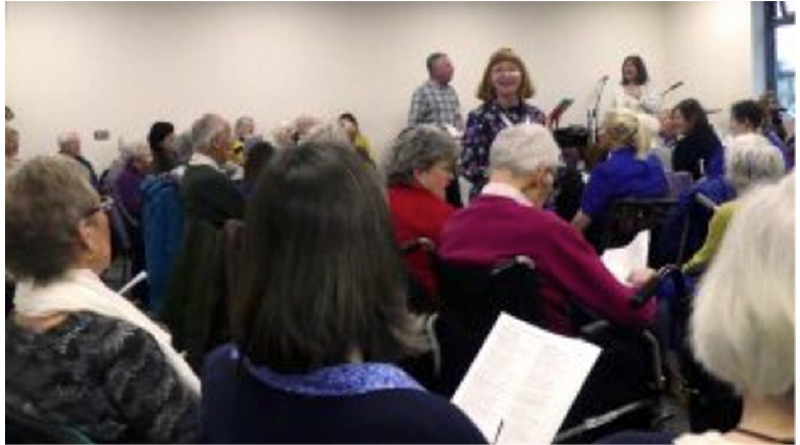 More than 115 people took part in an event showcasing the benefits of music therapy for both people living with dementia and their loved ones.

The Big Memory Sing held at Cirencester Baptist Church was organised by The Lakes Care Centre, operated by The Orders of St John Care Trust (OSJCT), together with Mindsong, a charity which offers music therapy and singing groups for people with dementia across Gloucestershire.

It was attended by residents from five OSJCT homes together with their carers and relatives as well as people from other local care homes and families from the community.

Those attending took part in a 45-minute communal singing session led by Mindsong’s Meaningful Singing Group staff and volunteers, singing a selection of songs carefully chosen to be accessible to people living with dementia such as Que Sera Sera, Bring Me Sunshine and We’ll Meet Again.

Rose, a resident at the Trust’s Athelstan House, said she had loved taking part, adding: “I thought it was really, really good. I think when we are all together like this, we forget that we’re getting older and we just enjoy each other’s company. I think this was a lovely thing for us to do.”

OSJCT Admiral Nurse Nikki Rowe, who had helped plan the event, said the aim was to promote the benefits of music for both people with dementia and those caring for them.

She said: “Music can be a very powerful means of helping to evoke memories for people with dementia, but it also has many other positive effects, such as reducing anxiety and lifting mood, and these can also be very beneficial for carers and relatives of those with dementia.”

Nikki said she was thrilled with how many people had attended The Big Memory Sing and how much everyone had enjoyed themselves.

She added: “It’s been an absolutely amazing afternoon. The atmosphere was incredible, it was just so lovely to see so many people singing and enjoying themselves together. You could see that many were really moved by the music and we’ve had some fantastic feedback from people saying what a wonderful time they’ve had and asking when the next event is!”

Mindsong Volunteer Manager Kate Hicks Beach said it had been a “total joy” to take part in The Big Memory Sing.

She added: “The power of music to bring people together, draw them out of isolation and find something to be joyful about was never more evident than at the Big Memory Sing on Friday. It was a happy event for those there but even more importantly, that feeling of togetherness and being able to remember those songs and of being ‘more themselves’ will linger for some time even if the event itself slips from the memory.”