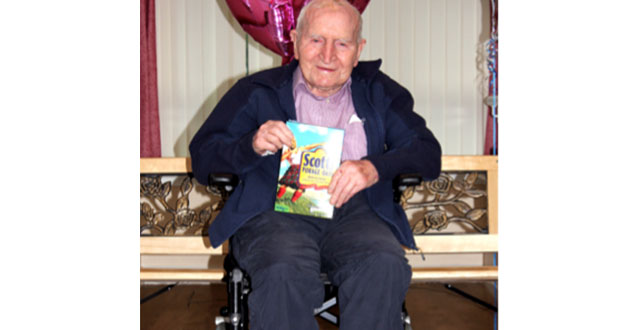 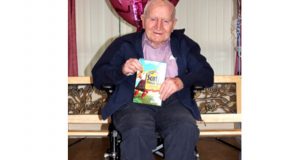 The family of a care home resident from Paisley has revealed his secret for reaching his 105th birthday – a regular dose of porridge.

Former greyhound breeder and racer Neil McNeil, who has lived at Bupa’s Elderslie Care Home for three years, insists on a daily bowl of the traditional Scottish breakfast cereal, and will often request a second bowl as a midnight snack.

The oat-loving centenarian, whose favourite brand is Scott’s Porage Oats, celebrated his milestone birthday at the care home on Fulbar Road on Tuesday 4th October, with an afternoon party attended by close family, residents and staff.

His daughter, Sheila, 72, told of how her father has pursued many hobbies throughout his long life, but it was his porridge oats and greyhound pups that have kept him young at heart.

Sheila said: “I have never known anyone to be such a big fan of porridge – he swears by having a bowl every morning to stay in good health and I’m sure he would have it for every meal if he could.

“He makes it with just milk, and has never had it any other way. His love for porridge has also been passed down through the family generations. I can’t remember ever eating anything else for breakfast when I was younger and even the great grandchildren enjoy a bowl or two now and again.

“His other passion has always been his greyhounds. He must have bred, raised and raced over 100 throughout the years and used to regularly travel to Ireland to buy or sell the dogs to train or win gold.

“We even went to Shelbourne Park in Dublin for his 90th birthday to watch the races. He really enjoyed it.”

Born in 1911 in Paisley, Neil began his working life at his father’s coal business, before becoming the local bus driver at just 14. Before the outbreak of the Second World War, he moved to London with his brother and joined the Ministry of Defence.

He travelled across England throughout the war, working in a variety of munitions factories. In one such factory, he met Margaret who was working as part of the war effort – it was love at first sight.

Neil and Margaret were married on New Year’s Eve in 1942, and Margaret gave birth to a daughter, Sheila, in 1944. He has three granddaughters and four great grandchildren.

Now a family, the McNeil’s moved back to Scotland in 1953 and settled in Neil’s birthplace of Paisley, where he began to pursue his interest in furniture making and opened a local furniture shop. Neil was also particularly passionate about antiques, and his collection attracted an international market, with many of his items sold to America.

A spokesperson from Scott’s Porage Oats said: “Reaching the incredible age of 105 is a remarkable achievement and all the team here at Scott’s Porage would like to wish Neil McNeil a very happy birthday.”

Fiona Truesdale, Home Manager at Bupa’s Elderslie care home, said: “Neil’s been with us at the home for over three years now and I’ve never once seen him have anything else for breakfast, so we always keep a spare box or two handy so we don’t run out.

“Residents and staff had a fantastic time at Neil’s birthday party and everyone was absolutely delighted to help him celebrate his big day with drinks, refreshments and party food.

“We’re all so proud of Neil for this amazing accomplishment.”