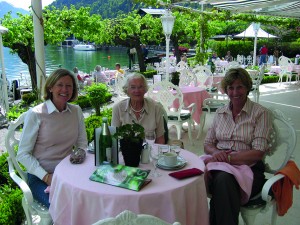 A care home resident from Dundee has revealed her spicy top tips for reaching her 103rd birthday – a love of hot curries.

Margaret Phillips, who celebrated her birthday at Bupa’s Balcarres Care Home where she has lived since 2013, says she attributes her good health to fine Indian cuisine as well as keeping fit and active – and a tot of whisky every night before dinner.

Born in 1912 in Dundee, the great-grandmother of 16 gave birth to her first daughter Jacqueline just before the outbreak of the Second World War, before moving to India with her first husband, William. They spent three happy years there together, before the family returned to Britain in 1940.

William, who served in the North Staffordshire regiment, sadly passed away after just after the War and Margaret remarried and returned to India with her second husband, also named William, in 1946, giving birth to her second daughter, Susan, in Calcutta (now Kolkata) and remaining there until 1957.

Margaret’s second marriage took place in Bombay (now Mumbai), and she and William spent their honeymoon at the famous Taj Mahal Palace & Towers hotel, of which she has very fond memories.

Margaret’s daughter, Jacqueline, 78, told of how her mother’s time in India boosted her talents in the kitchen.

Jacqueline said: “She makes a mean curry and was famous within the family for her curry suppers, which she would hold on a regular basis. And she always did enjoy a tot of whisky every night before dinner.

“She has been very crafty all her life and has always loved sewing, knitting and dress-making.

“During the war time, you were only able to purchase odd bits of material, but mum would collect these and make them into the most beautiful frocks for my sister and I. She has also knitted a variety of items for her grandchildren – clothing, patchwork duvets, ragdolls, you name it.

“She absolutely loves family occasions and getting everyone together. I live in Jersey now so we aren’t able to get the whole family together very often and she just loves it when we do.

“Attending the weddings of her grandchildren is always a highlight for her. She doesn’t stop smiling all day.”

“Margaret is such a pleasure to be around. She’s very lively and is popular with everyone who lives and works here.

“Residents and staff had a fantastic time helping Margaret to celebrate with drinks, refreshments and party food.

“Turning 103 is such an incredible accomplishment and we’re all so proud of Margaret,” she added