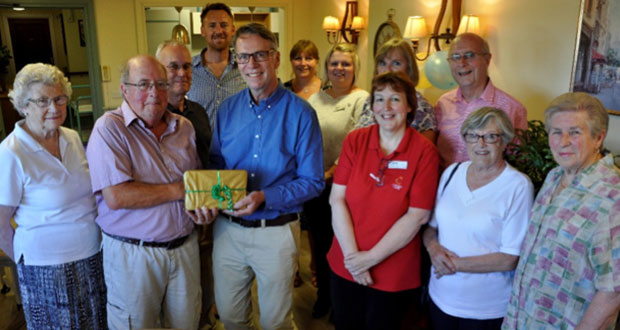 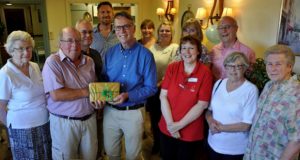 Care home residents and staff joined volunteers from New Forest Hospital Radio to bid farewell to a popular presenter and leading light of the station.

Mike Robinson, who until recently lived on a boat in Lymington, is moving to the Isle of Wight and handing over his radio role.

During his 13 years as a presenter, he played a major role in a series of broadcast innovations and struck up a partnership with Lymington care home operator Colten Care.

Staff at Belmore Lodge in Lymington hosted a surprise presentation for Mike after he collected his last set of requests from residents there.

Jim said: “In the early days, Mike was instrumental in fundraising for a studio at Lymington hospital capable of 24-hour broadcasting. He then led a drive to install speakers throughout the hospital, giving daytime visitors something to listen to and always succeeding in keeping hospital management on side. Mike is a past chairman and president of NFHR who provided us with strong leadership and helped to expand our audience to care homes as well as the hospital. He will be sorely missed.”

The Colten Care shows are proving a hit with residents and families alike. Jim said: “Music requests can provide the most marvellous journey for older people. It’s like a walk back in time and if you have your name mentioned on the radio as well, that’s extra special.”

Jackie Fergusson, Activities Organiser at Belmore Lodge, said: “Mike has been a constant link with the station for our residents. Whenever he came round to collect the dedications before each show, he remembered everyone’s names and what sort of music they like. He was always able to use the information he retained to strike up a personal conversation with each resident. That’s something people have really appreciated.”

Charles Carter was among the residents who signed Mike’s good luck card. Charles said: “I’m sorry to see Mike go as we’ve always really looked forward to his shows. It’s so nice to hear your name read out and listen to your music request.”

Taking over Mike’s shows from now are presenter and programme manager David Bennett and Jonnie Waterhouse, who will collect the dedications.

Mike’s presentation from NFHR colleagues was a set of ‘sailing gentleman’s accoutrements’, including letter opener and magnifying glass, housed in an engraved wooden box.

Mike said: “It has been an absolute joy to have volunteered at NFHR for so many years and, more recently, share the gift of music more widely with our care home listeners. I have met some wonderful people through the station and I’ll certainly stay in touch from across the Solent.”