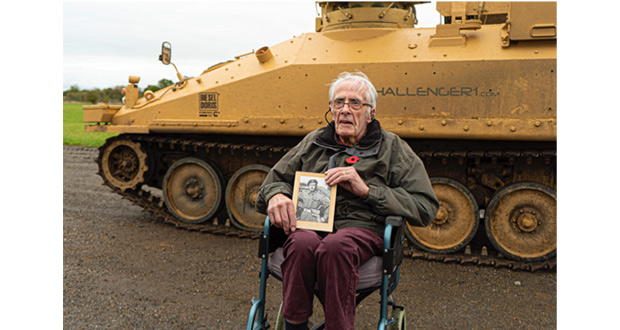 An 88-year-old army veteran let loose as he swerved, sped and twisted his way across fields in a tank once again courtesy of his care home.

Ron Pendry, a resident at Goatacre Manor Care Centre, near Calne, joined the 9th Lancers in Bushley Green, Tewkesbury, at the tender age of 18. He worked across Europe, including Scotland and Germany, as a driver and tank instructor.

Despite enjoying his time in the army, Ron left in 1960 when he married his wife, Violet, with the couple recently celebrating their 67th wedding anniversary (25th October).

After leaving the army, Ron worked as a lorry and delivery driver for Oldacres in Bishops Cleeve, Gloucestershire, before joining a mill working for cattle feed.

However, despite living a fulfilled life as a family man, Ron had always dreamed of getting back in a tank, heralding the highlight of his former career.

Ron’s wish finally came true as he criss-crossed through fields near Bicester on Friday (1st November) thanks to the efforts of care home staff and the team at SWB Motorsport.

The tank was an armoured personnel Alvis Spartan APC carrier of the British Army. It was built in 1979 and spent 37 years in service where it most likely operated in Iraq and/or Bosnia and Herzegovina.

Following the experience, Ron said: “It was quite emotional seeing the tank at first, especially when I got back inside after not having done so in so long.

“Memories came flooding back and I loved every moment of it, especially the swerves and twists – that was a lot of fun. I want to thank the team at Goatacre for helping me achieve something I never thought I’d get a chance to again. It’s been a special day.”

His wife, Violet, said: “It brought back a lot of memories for Ron, he’s really happy bless him. He’s been talking about today for a long time so I’m so happy for him.”

One of his granddaughters, Sarah Stevenson, who proudly watched her grandad get back into a tank, said: “I’m absolutely over the moon. What a fitting way to end his career in the military. I can’t thank the Goatacre team enough for allowing grandad to drive a tank again. It’s just been such a brilliant day.”

Driver Mike Dex said it was ‘a pleasure’ to help Ron. He said: “This is the first time we’ve helped an ex-military man in his 80s get back into a tank. He’ll certainly go down in our record books as our oldest passenger!

“It’s been a really fun day out and I’m so pleased we helped Ron complete his wish of driving a tank again.”

In addition to fulfilling a lifelong ambition, Ron also used the event to help raise vital funds for Help for Heroes.

Goatacre Manor Care Centre is a family-run nursing and residential care home, which has been in the O’Dea family for 30 years and specialises in person-centred nursing care.

Steve Oswald, Operations Director and Registered Manager at Goatacre, said: “We are thrilled that Ron was able to have this amazing experience today. He’s been waiting for this moment with anticipation ever since we revealed we were going to help him get into the driving seat of a tank again. It was a moment he won’t forget, never mind us! It’s times like this that make working in the care sector priceless.”