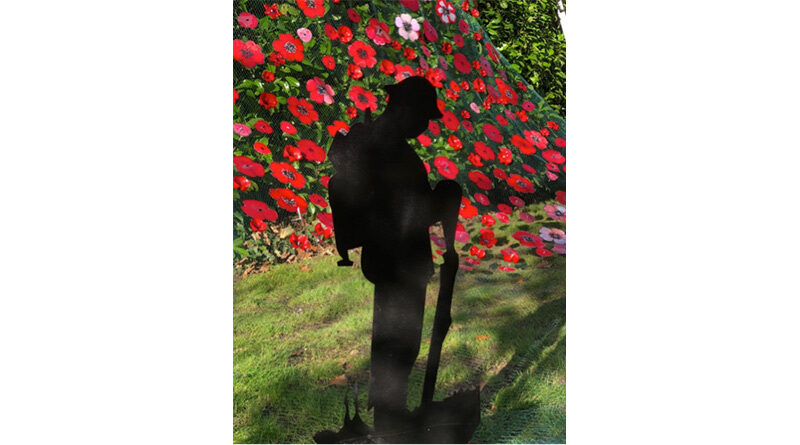 Residents, staff and staff family members at a Surrey care home have hand-crafted a cascade of poppies to mark this year’s Remembrance Sunday.

Residents living at the Huntington & Langham Estate in Hindhead, along with staff and their family members, have been busy in the last few weeks making more than 200 model poppies to create an eye-catching art installation that will serve as a poignant reminder of the sacrifices so many have made during the two World Wars and other conflicts.

Installed on the 4th November alongside the iconic silhouette of a First World War soldier, the 10ft by 15ft display is set to honour those who died, with many of those living in the home having vivid memories of the wartime period.

The poppies featured in the memorial have been handcrafted by both residents and staff using a variety of techniques. Some have been laminated from paintings, while many have been fashioned using the bottom of a Coca-Cola bottle, which served to form the perfect shape of a poppy.

Charlie Hoare, Director of the Huntington & Langham Estate commented: “Remembrance Sunday is always an important occasion here on the estate. Many of the people living here experienced the war, with even more living through the aftermath, including rationing and the post-war rebuilding process. Consequently, we’re keenly aware of the sacrifice of previous generations, and we want to do what we can to honour their memory.”

He continued: “More than twenty residents and many more staff members have taken part in some from or other so it really was a team effort. Everyone wanted to contribute where possible – and we’re delighted with the result.”

Charlie Hoare added: “We’re so privileged to be able to hear first-hand stories from the war, and it’s important for those who experienced it to be able to talk about it if they wish, particularly if they lost someone close to them. Taking an active involvement in remembering those who have gone before helps to keep their memories alive and this is something we’re very keen to encourage.”