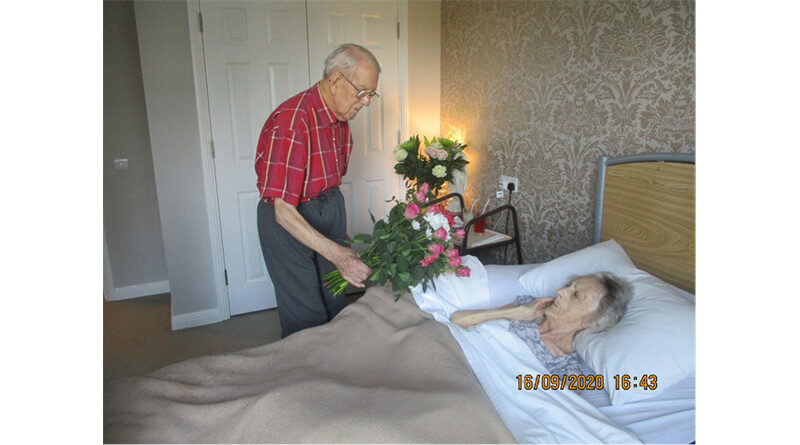 Jean and Alan Watts, two residents at Sunrise of Westbourne, have celebrated their 69th wedding anniversary.

The couple celebrated this remarkable anniversary with a restaurant-style dining experience in Sunrise of Westbourne’s private dining room with a delicious three course meal.

Jean, 89-years-old, and Alan, 94-years-old, were both born in North Staffordshire and met at the Trentham Gardens Ballroom in the late 1940s. Ever since their first dance, Jean and Alan have shared a passion for ballroom dancing during their seven-decade relationship, with the Wessex Hotel in Bournemouth becoming their favourite dancing hall.

After meeting, the couple went on to marry in 1951 at the Church of Sacred Heart in Tunstall, Stoke-on-Trent. They then moved to the Westlands area of Newcastle-under-Lyme before also living in Hodnet, Market Drayton and Stone. Jean and Alan also had a second home in Meyrick Park for fifteen years before moving into an apartment in Branksome Park, Dorset in 2015. They then both moved into Sunrise of Westbourne in March 2020 and have stayed ever since.

Together, Jean and Alan always enjoyed travelling and their love of dance took them on many cruises, with the SS Canberra and the QE2 becoming their favourite cruise ships.

In previous years, the Watts family have celebrated the couple’s major anniversaries by getting all three generations together. These celebrations took them to many locations, including their beloved Victoria Hotel in Sidmouth as well as Jersey and the Algarve.

Asked what the driving force behind their long marriage is, Jean and Alan would often disagree, an answer in itself.

Speaking of their anniversary, Wendy Blow, Senior Director of Community Relations at Sunrise of Westbourne, said:

“It is truly wonderful to see Jean and Alan celebrate their very special 69th wedding anniversary together. We were only too happy to accommodate this remarkable occasion by arranging a delicious three-course meal in our private dining room. And, since joining us, it has been a pleasure to get to know both of them and of their loving marriage throughout the years. The whole Sunrise of Westbourne care home wish them many more happy years together.”