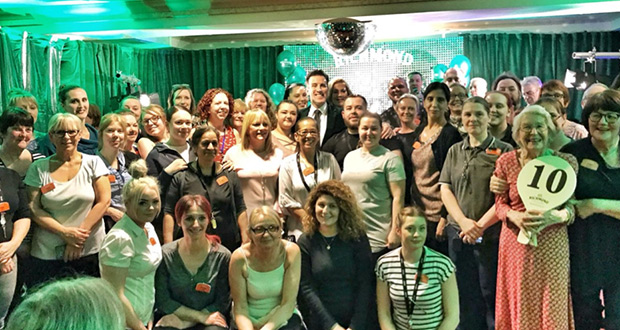 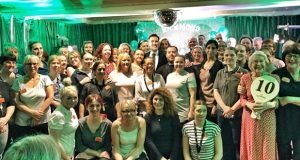 The team at Sunrise of Tettenhall received a surprise last week when dancing star Anton Du Beke paid them a visit and treated them to a special ballroom dance class.

The lucky team of carers arrived for what they initially thought was a regional meeting, only to be surprised by a performance from Anton and his dance partner, a live swing band and confetti canons.

On top of this, the community’s activity room was transformed into a glamourous ballroom for a top-quality dance class led by the master himself, giving the team members a chance to channel their inner ballroom dancer and glimpse into the world of Strictly Come Dancing.

Many of the residents at Sunrise of Tettenhall were also in on the secret, waiting to give their carers a heroes’ welcome and join in with the fun celebrations.

The memorable event was organised by Richmond sausages after a poll revealed that carers are one of the UK’s favourite workforces. The surprise visit was planned as a big thank you from the nation to all the carers across the country who work so hard on a daily basis.

“The team at Sunrise Senior Living do an amazing job, and I really hope they enjoyed the surprise. Carers do such important work – always in high spirits and with a welcoming smile on their face. It’s fantastic that they were recognised as one of the Nation’s Favourite workforces, and I’d personally like to say ‘thank you’, on behalf of the nation, for the work that they do.”

“We’re all such big fans of Anton’s so it was a thrill to have him here at Sunrise to say thank-you to our kind, hard-working carers. Getting the residents involved to show their appreciation and join the dance class was also so special – it’s not a day we’ll forget in a hurry!”