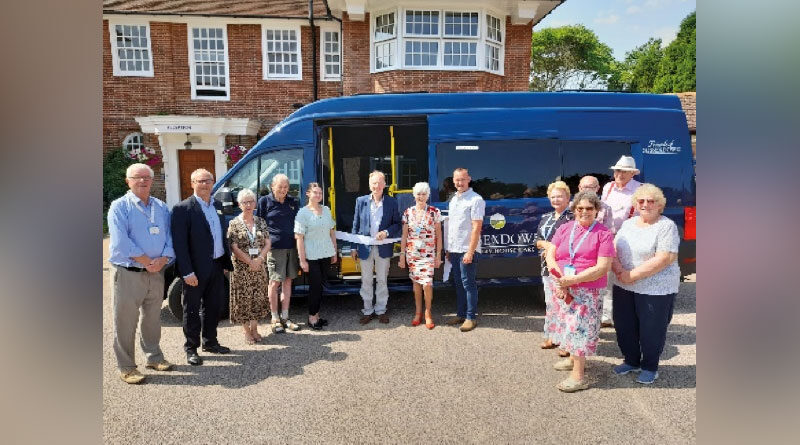 Residents at Sussexdown were delighted to welcome a brand-new minibus to the home named ‘The Baker Bus’, which was kindly donated by the estate of the late Wing Commander Neville Baker, a former resident at the home.

Neville Baker was the son of a Royal Air Force (RAF) pilot from the Great War and followed his father to a career in the air. For over thirty years and for the benefit of peoples on three continents, Neville served King, Queen, Sultan and country and saved countless lives, both in combat and in peacetime search and rescue operations. He did so with “Loyalty, courage, and good conduct,” as Her Majesty the Queen commanded in his RAF commission in 1959.

After caring for his own mother for many years, Wing Commander Baker was so grateful for the care that he received at Sussexdown that he was keen to ensure that future generations would also be so well cared for at the home. His memory lives on at Sussexdown through donations which have seen the provision of the new minibus, the funding for a driver, a staff fund and a fund for additional activities, outings and entertainment for residents.

Paul Morris, Home Manager at Sussexdown commented:
“The new minibus, which will be known as ‘The Baker Bus’ is not only going to provide residents with many adventures of their own this summer, but for many years to come. From all of us at Care South, we would like to extend our gratitude and thanks for this wonderful gift. The unveiling was attended by Guy Wrench (cousin of Wing Commander Neville Baker), Simon Bird (Chief Executive of Care South), Friends of Sussexdown, and team members and residents of the country house care home who will benefit directly from the bus.”

John, a resident at Sussexdown added:
“What a wonderful gift we have received here at Sussexdown. It was a wonderful moment to attend the unveiling of the new minibus and we have already started planning our trips. It is incredible generosity such as this that enables us to continue doing the things we love and to explore new places.”