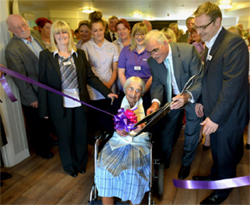 Care UK’s £60 million investment plan to help transform older people’s care in Suffolk in a partnership with Suffolk County Council has reached a major milestone with the official unveiling of Mildenhall Lodge, the first of ten new care homes opening in 2014 and 2015.

As well as opening Mildenhall Lodge, the new care home, the ceremony also marked the opening of The Mildenhall club on the same sites which is for older people who still live independently in their own homes.

Councillor Alan Murray, Cabinet Member for Health and Adult Care, Suffolk County Council, cut the ribbon alongside Care UK Managing Director for Residential Care Services, Andrew Knight, and Mrs Maureen Smith, a resident of nearby Wamil Court who helped name the new home. Maureen also helped mark the occasion by cutting a special celebration cake with fellow Wamil Court resident, Grace Puttick. Maureen and Grace are amongst the 27 residents who are looking forward to moving into their new home over the next two weeks, after which Wamil Court will close.

Councillor Alan Murray said: “The opening of Mildenhall Lodge is the start of us realising the vision we had for the future of long term care in Suffolk. The new home and club boast great facilities and with its friendly and welcoming design I am sure that the residents will be extremely pleased with their new home.

With the number of older people and those suffering with dementia in Suffolk set to double by 2030 it was essential that we found a provider that was able to invest in and run homes and clubs that provided the highest quality of care for Suffolk residents – Care UK has demonstrated that it is more than up to the job.”

Andrew Knight, Managing Director of Residential Care Services, Care UK, said: “The opening of Mildenhall Lodge is a major milestone in Care UK’s partnership with Suffolk County Council which is transforming the facilities and services for the care of older people in the county. The care home is furnished and equipped to provide the highest levels of safety and comfort so residents can enjoy living as independently as possible and we very much look forward to the first residents moving in and to welcoming the first customers at the Mildenhall Club.”

The opening of Mildenhall Lodge was attended by local councillors, community groups and health care representatives as well as members of the public who enjoyed an open afternoon with guided tours of the facilities, free refreshments prepared by the Mildenhall Lodge chef and musical entertainment. Mildenhall Lodgewas amongst thousands of care homes across the country that opened its doors to the public on 20th June in support of National Care Home Open Day 2014.