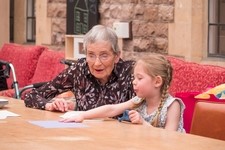 The Bristol-based charity featured in Old People’s Home for 4 Year Olds has announced it will be creating a nursery at one of its retirement communities.

The St Monica Trust, whose residents captured the hearts of the nation in the hit Channel 4 show, will create a lasting legacy to the ground-breaking social experiment by establishing a nursery at one of its sites.

“When we were asked by Channel 4 to take part in this project, we all saw the potential of this wonderful experiment for changing the way we care for older people in the UK. To create a lasting legacy for all great work started by this project, the Trust has committed  to introducing a children’s nursery at one of our retirement communities and we are already consulting about a potential partnership with a local preschool.

“Seeing the evidence of the positive impact of bringing these two generations together has only strengthened the Trust’s desire to create open communities that actively encourage contact across different age groups. We will also be installing children’s play grounds at all of our sites, including an indoor play area at our newest development in Keynsham, The Chocolate Quarter.

“And for those of you that are wondering, we’re supporting all the participants of the show to help them stay in touch with the children and their families, and regular visits are already taking place.”

The social experiment was filmed for Channel 4 by CPL Productions at the Trust’s Cote Lane retirement village. The series, which saw eleven St Monica Trust residents brought together with ten preschool children, was aired over two nights attracting widespread critical acclaim and a peak audience of 2.2 million viewers.

In a series of extraordinary and moving scenes, the experiment showed the transformative power that simply being around the children had for the older people, resulting in some amazing improvements in the residents’ mental and physical health.

“From the first visit, we knew we had found the perfect place and would also be working with a like-minded management team who were prepared to trust the experiment. Knowing that the experiment has resulted in the lasting legacy of a permanent nursery is a wonderful feeling.”

“It became evident quite quickly whilst watching this series that the impact the children had on the older adults was astonishing.

“Knowing there’s now a legacy from this experiment is incredible and we hope it can play a small part in helping to tackle the issue of social isolation in retirement communities and care homes.”