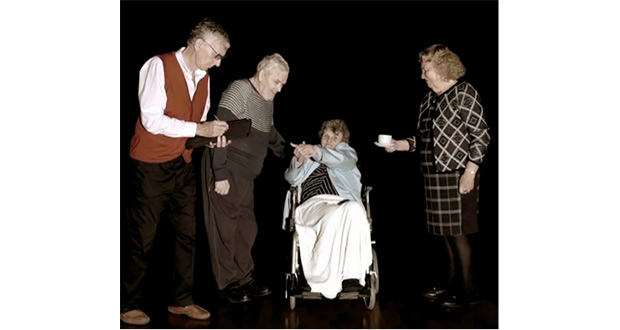 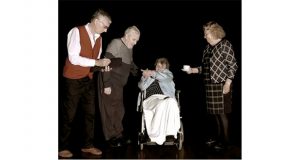 Residents at Sandalwood Court care home in Corby took a trip down memory lane this week when a silent movie featuring three of its residents, filmed as part of a major arts festival, was released online.

Residents from the care home were invited to take part in the movie by the organisers of the ‘Hat Fair’ project – the UK’s longest running festival of outdoor arts. Mary Wadsley, Barbara Wodehouse and George McAleer were chosen because of their links to Corby – one of two UK towns to feature in the movie.

The silent movie was originally produced and screened at the end of last year as part of the Hat Fair’s ‘Celebrating Age’ season – a series of projects that explored the responses of older residents to viewing original archive footage from their local area that had been digitally re-mastered.

Janet Hymes from Shaw healthcare, who works as the activity co-ordinator at Sandalwood Court, remembers the time she first heard about the project;

“We contacted the Hat Fair organisers when we found out they were looking for long-time Corby residents to get involved in a video project and offered the opportunity to our residents. As an organisation we get involved in a lot of inter-generational projects, as well as regularly sharing images and footage from the past, as we know that both can have a hugely beneficial impact on the health and wellbeing of our elderly residents.

“Mary came to live at Sandalwood six years ago, while Barbara has been here for about two years and all three residents jumped at the chance of being involved. They went with family members to a private screening of the film at Corby Cube last December, but with the movie being released online it has given us the chance to share it with other residents at Sandalwood, as well as the extended family and friends of our three movie stars. It has also been nice to share memories of George, who is fondly remembered by everyone at Sandalwood Court.”

The Recycled Silent Movie and the Celebrating Age project is funded by the Arts Council of England and the Baring Foundation. The project encourages arts organisations to work in partnership with private companies to take arts and culture into everyday places to help older people to find it easier to engage. The movie can be viewed here – https://hatfair.co.uk/events/recycled-silent-movie-2019/