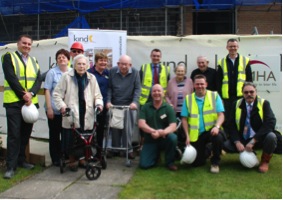 Shirley care home tops out one year after comedian Ronnie Corbett helped launch the redevelopment of an MHA care home in Shirley, the new building is now nearing completion.

Residents of Hall Grange were invited to inspect the new building, which has now been ‘topped out’ with the completion of its roof. The new building, being constructed by Kind & Company Builders, will provide 45 en suite rooms and features such as a hair salon and activities room. It will be linked to an adjacent retirement living community for 23 residents.

Residents of the current building will move in when the new development is completed later this year.

Resident Sidney Stiles said he was “very impressed” with the new building.

“The rooms are bigger and there’s more space,” he said. “I particularly like the wet rooms, they’ll be very easy to get into and use. The corridors are wide and the corners aren’t all square, some are curved. I think we will have more independence.”

He added, “I’m very happy at Hall Grange. People are very nice and it feels comradely.”

Irene Owens added, “The builders were all very nice, showing us which rooms would be which. The new building looks out on a lovely old oak tree. It’s going to be very modern. I love living at Hall Grange. The staff look after us so well and you can really trust them. But I think it’s time for a new building.”

Raymond Thompson, who moved to Hall Grange just after Christmas, said, “It’s very impressive and I think we can bring over the atmosphere we have now into the new building. It seems very promising.”

Karl Hallows, Development Director at MHA, said, “We received great feedback from residents, staff and relatives during the day.

“MHA continues to be committed in improving our residents’ homes, ensuring they meet with the requirements of the 21st century and are future proofed for generations to come. I am pleased with the work completed by Kind & Company, which reinforces our desire to work with such construction partners.”