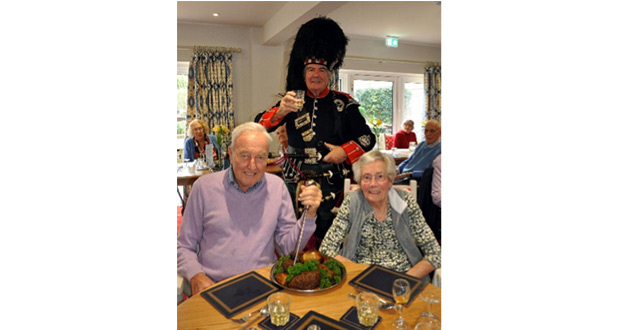 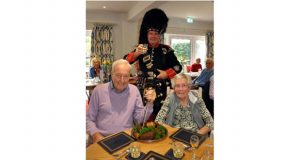 Dorset care home resident Betty Butler knows a thing about the pomp and ceremony of Burns Night – she is the daughter of the late John Erskine, 1st Baron Erskine of Rerrick.

Betty, 95, lives at Colten Care’s Avon Reach in Mudeford, and was among the residents who celebrated the life of Robert Burns with a piper, poetry and the ceremonial stabbing of the haggis – as well as a wee dram of Scotch whisky of course.

Betty said: “I can’t tell you what a wonderful time I have had today.

“Listening to the piper made me want to cry with happiness. I don’t feel so very far from home now.”

Betty grew up in Edinburgh, where her father, a decorated, military man, was the General Manager of the Bank of Scotland and was later knighted.

Betty followed in her father’s footsteps and joined the Army.

She was made an officer in The Auxiliary Territorial Service (ATS) the women’s branch of the British Army before she was even 21 and was posted to the South of England where her company manned the searchlight hunting German planes on the Isle of Wight.

Betty said: “Although I may have lost my accent I have remained Scottish through and through.

“Celebrating Burns Night is a part of me and has made me happy beyond words.”

The first Burns Supper was held in memoriam by the poet’s friends, on 21 July 1801, the fifth anniversary of his death. It has been a regular occurrence ever since and is celebrated around the world.

The haggis was then laid upon a table and the dish was addressed with poetry, before being sliced open with a ceremonial dirk (knife).

Sam Reid, the manager of Avon Reach said: “It was a fabulous occasion and so poignant when the piper played.”

She added: “It was a particular treat for Betty, who is a much loved member of our family here at Avon Reach.”