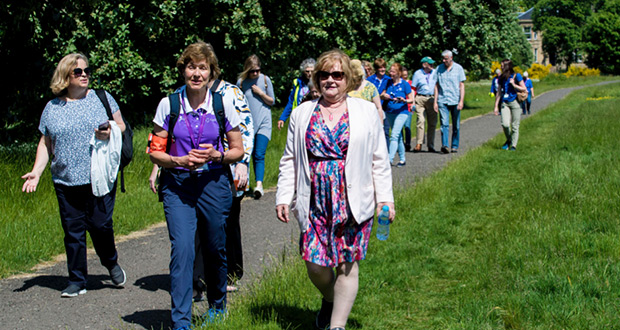 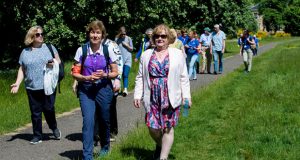 SCOTLAND’s first ever Dementia Friendly park is being launched yesterday (5th) in one of Stirling’s best used recreational areas by walking charity, Paths for All.

In a bid to make Stirling’s Kings Park more accessible to everyone, the city space has been transformed to allow those living with dementia to be able to enjoy, and feel safe in, outdoor spaces.

A celebration event between 1pm – 3pm was held at the Smith Art Gallery and Museum on Dumbarton Road, to discuss the changes made to the park.

A tour of the park provided opportunities to learn how better design of outdoor spaces can help improve the quality of life for anyone living with dementia.

Following the local community consultations as well as discussions with people living with dementia, their carers and the Stirling Walking Network, Paths for All identified several ways in which the park could be improved for those with dementia.

Dr Corinne Greasley Adams, Development Officer with Paths for All, who worked with local communities to implement the improvements to Scotland’s first Dementia Friendly Park, said: “This project was an important step for us in working towards our aim of driving improvements in the quality of life, wellbeing, empowerment and inclusion of people living with dementia in Scotland.

“We listened to the local community and were able to respond and make change happen.

“The experience for all visitors to Kings Park will be improved by the installation of a handrail on a steep section of the path, dementia friendly toilet signage and new benches which will provide rest points on long sections of the path.

“With these changes, we hope to spread the message that anybody can enjoy walking activities.”

Additionally, an information leaflet with a map has also been created to assist with wayfinding and decision making prior to visiting King’s Park.

Mental Health Minister Maureen Watt said: “Making our parks and public spaces more inclusive for people living with dementia to improve their physical, social and mental health is so important.

“The Kings Park project shows what can be done to help make our communities and green spaces more accessible and inclusive for people with dementia.”

It is estimated that Scotland has around 90,000 people with a dementia diagnosis who could benefit from more everyday walking opportunities.

A gardening volunteer day in partnership with Friends of Kings Park was also held to introduce people to a regular community-based activity.

People living with dementia benefit from being outdoors and in contact with nature as it can help to relieve stress, increase self-esteem, produce vitamin D, and exercises the brain, helping with memory and cognitive functioning.

Even 10 to 15 minutes of daily walking outdoors can improve the overall wellbeing of anyone living with dementia. Physical activity can bring many benefits, such as improved: sleep; physical fitness; confidence; mood; and self-esteem. Being active can help improve memory and slow down mental decline as well as reduce the risk of osteoporosis and stroke.

Scottish walking charity, Paths for All received £15,000, in 2017, from The William Grant Foundation in partnership with the Life Changes Trust. This enabled the Dementia Friendly Walking project to work with people living with dementia and carers to make Kings Park in Stirling more accessible. In March 2018 a further £6,000 was accessed through the participatory fund, Your Place Your Priorities, from Stirling Council. Paths for All aspired to make Kings Park Scotland’s first Dementia Friendly Park.

During the Dementia Friendly Kings Park project, further works have been overseen by Stirling Council and the Kings Park Paths Group. This has included resurfacing paths around the perimeter of the park, adding additional signage and the installation of further seating.

Stirling Council Provost Christine Simpson said: “I am delighted to support this important initiative which will bring pleasure, relaxation and increased wellbeing to our Stirling residents. This is particularly important for people living with dementia and their carers as many of the improvements have been specially designed to enhance their access and quality of life.”