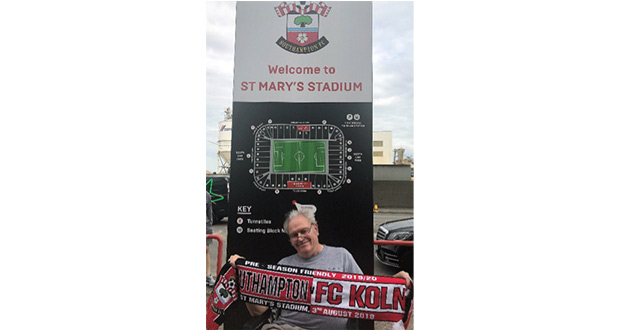 When John Moore’s care home staff asked him to make a wish, the Saints fan said he wanted to visit the ‘new’ St Mary’s stadium.

John, a resident at Colten Care’s St Catherines View in Winchester, spent literally hundreds of Saturdays watching his team play at The Dell.

Unfortunately he became ill when St Mary’s was being built between 1999 and 2001, and has never visited his team’s new ground.

Laura explained: “It’s no secret that John is a huge Southampton FC fan and once he said what he wanted to do we were determined he would finally see his favourite team’s amazing stadium.

“So I spoke with the club, who were fabulous, and we arranged for John to attend one of their pre-season, friendly games.”

On Saturday 3rd August John and Laura travelled to the St Mary’s to watch the Saints take on FC Koln.

Laura said: “John was just so happy. The club had arranged for us to sit pitchside and he couldn’t believe how big the stadium was.

“He proceeded to give me a running commentary on the game of course and then to top it all off the Saints won 2-0.”

John joined the rest of the stadium in celebrating goals by Danny Ings and Pierre-Emile Hojbjerg.

Afterwards he said: “I wasn’t prepared for how massive the stadium would be and the atmosphere was fantastic.

“St Mary’s is a lot louder than The Dell ever was and the fans even seemed to be enjoying themselves more.”

Following the game John and Laura looked around the outside of the stadium and found a statue of former player, manager and President Ted Bates MBE.

“When I spoke to him later on the phone he was so happy. He really loved his day out to the football and now he wants to go back and watch the Saints play Manchester United!”