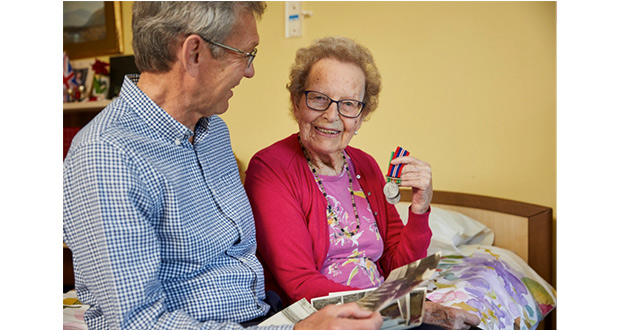 As Remembrance Day approaches, many people stop and remember those who have died in wars and those who served in Her Majesty’s Armed Forces.

But for the family of Second World War pilot Halsey Roscorla, there was little of his RAF days to reminisce over. He never spoke of his time in the service to his wife Joan or children Anne and Charles, and when he died in 1966 at the age of 47, his family thought his military stories were gone forever.

However, a chance sighting of a photograph and film footage in a news report in 2005 meant Joan, who now lives at Royal Star & Garter, and her family, were able to discover Halsey’s untold story.

They learned that, in 1945, Halsey helped fly 732 orphaned child survivors of Nazi concentration camps from Prague to England. This group of children, which included only 80 girls, would become known as The Boys. They went on to build successful lives around the world. Among them is author Arek Hersh MBE, who wrote about his Holocaust experience in A Detail of History. TV star Robert Rinder’s grandfather Moishe was also one of The Boys who was rescued.

Charles was watching the news with his wife Martine when he learned of Halsey’s courage: “In our photo album drawer at home there is a series of pictures of planes lined up on a runway, and [it’s] looking like refugee children going into these planes. I’ve known them forever. And we turned on the news one night in 2005 and it was a celebration of the refugee children being picked up at Prague airport. Children who had been in camps to be brought to this country, they were taken to Windermere. It was the 60th anniversary. Martine and I were ‘Oh! What was that?!’”

The family contacted the Imperial War Museum, which confirmed Halsey, who had joined the 570 Squadron on 1 July 1945, was one of the pilots that flew The Boys to a new life.

Halsey had joined the RAF in 1942, but apart from his role in bringing The Boys to safety, his family know very little of his time in the military. His son, Charles, said: “We were shocked and amazed to watch the news and see these scenes coming to life. It was extraordinary. It has added a tiny link to the missing chain.”

Recalling his flight to the UK with The Boys, Mr Hersh told Royal Star & Garter: “I remember that journey well. There were about 30 of us sitting on the floor in the plane and the pilots came and gave us some bread and chocolate! They were ever so nice to us. I shall never forget what they did for us. We wouldn’t be here today without them. They freed Europe and brought us out to safety. I would love to see the photos and meet the family to say thank you personally.”

Lilian Black is chair of the Holocaust Survivors’ Friendship Association. She said: “Arek is one of the 16 stories featured in the Holocaust Exhibition and Learning Centre which we created in the University of Huddersfield. His is a remarkable story of survival and how he rebuilt his life in the UK. But without the RAF pilots to bring them here who knows what would have happened to him. All of the survivor community owe their lives to the brave men and women who lost their lives fighting Nazi Germany and we are forever grateful.”

Today, Joan lives with dementia at Royal Star & Garter. Care staff use photographs with meaningful props and music when supporting residents in dementia care. These activities transport them to earlier days and helps them re-live memories and reconnect with the world.