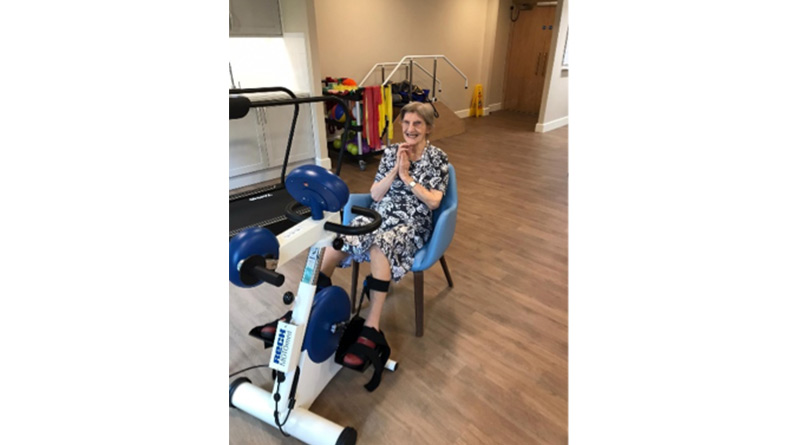 The residents finished the 874-mile High Wycombe Tour of Britain challenge on static bikes in the Physiotherapy Room of the Home in Hughenden Avenue on Thursday 9 July.

Together with staff from the Home who also took part in the Tour of Britain challenge, they have already helped raise £555 for Royal Star & Garter, a charity which provides loving, compassionate care to veterans and their partners living with disability or dementia at Homes in Solihull, Surbiton and High Wycombe.

The challenge was organised by the Home’s Activities and Physiotherapy Teams and started on Monday 22 June. It saw the group of residents and staff cycle in 15-minute sessions over the period.

Their progress was tracked on a map as they made their way across the country. Residents also enjoyed local delicacies from the area they were passing through, including Cornish pasties, Devonshire cream teas, Somerset cider, Eccles cakes and Lancashire hotpots.

There were also various activities and quizzes based on the regions they pedalled through, and a look at some of Britain’s iconic landmarks, such as Stonehenge. This helped the residents who were unable to feel part of the team effort.

Home Manager Chelle Daly said: “Activities and Physiotherapy play a key role in the overall care and well-being of residents at Royal Star & Garter. We work together to tailor care-plans for every resident in the Home. It was great that we were all able to come together to successfully complete our Tour of Great Britain and raise money.”

Lead Physiotherapist Maddie Venkatesh said: “The High Wycombe Tour of Great Britain was great fun and exactly what residents and staff needed after a challenging few months. Physiotherapy is very popular in the Home, whether it’s one-to-one exercise sessions on the static bikes, parallel bars, block of stairs and the treadmill, or group activities such as music to movement, Tai Chi and aerobics.”

Among those who took part was 101-year-old Ena, whose husband was killed in action in Belgium in 1944. She said: “We had a lot of fun cycling and taking part in all the other activities. Staff always think up clever ways to keep us active in body and mind.”