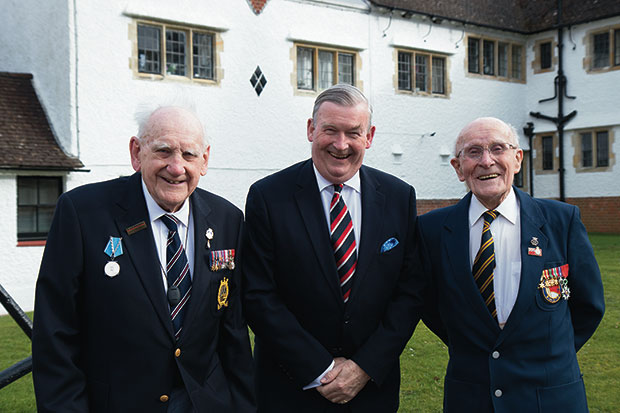 News
June 5, 2019D-Day, News
Veterans from The Royal Alfred Seafarers’ Society are taking part in a unique D-Day event in Portsmouth on 7 June to commemorate the 75th anniversary of the Normandy landings.

Lieutenant Commander Geoffrey Haskins, Legion of Honour and Robert Ball, Legion of Honour, both reside as tenants at The Royal Alfred Seafarers’ Society’s Weston Acres estate in Surrey. The site also houses the charity’s Belvedere House care home which specialises in caring for retired seafarers and their dependents.

Both Geoffrey and Robert received The Legion of Honour, the highest French order of merit, for their role in D-Day and have contributed first-hand accounts of their experiences as part of an innovative musical project that will be featured as narration for a classical composition by leading young British composer, and grandson of Geoffrey, James Olsen.

Members of the Bournemouth Symphony Orchestra (BSO), 70 amateur musicians from the BSO’s Rusty and Not so Rusty Musicians programme and 100 children from Portsmouth Cathedral’s children’s choir outreach programme will also join forces as part of the intergenerational project to document the day 156,000 Allied troops left the Hampshire and Dorset coasts to liberate Europe from Nazi occupation on 6 June 1944.

The inspiration for the project came from James Olsen after hearing stories of D-Day from his grandfather. He has subsequently titled his composition The Key Note of Everything to be SIMPLICITY which is a phrase from General Montgomery’s one-page plan for D-Day.

Some of the primary schoolchildren taking part provided questions for the veterans through video links to help convey the feelings, emotions and experiences of those who took part in D-Day. These included What did the uniform feel like? and Were you seasick?

The stories were shaped by James Olsen into the composition to help document the significance of D-Day ensuring memories of those involved live on and to educate the next generation by documenting history through music.

Lieutenant Commander Geoffrey Haskins, Legion of Honour, said: “It is difficult to find words that do not sound banal or hackneyed, but that morning, 75 years ago as a seventeen-year-old midshipman on the bridge of HMS Emerald, in the middle of the noise, ships, aircraft, people, transport, and landing craft, it was awe inspiring.

“The one thought in my mind, and clearly so many others, was: ‘Let’s hope to goodness this is going to work; and I am not going to mess up my bit’. It did work, Emerald hit all her selected targets, and Normandy was successfully invaded.”

James Olsen said: “I’m thrilled to be working with The Royal Alfred Seafarers’ Society and the Bournemouth Symphony Orchestra on this innovative project. We are fortunate that the Normandy landings are still in living memory, and their 75th anniversary provides an ideal subject for one of my ‘musical documentaries’ combining live performance, oral history and video.

“Documenting the stories of veterans is a huge privilege, and this project is particularly close to my heart given that one of the participating D-Day veterans is my own grandfather. I very much hope that we will raise awareness of a pivotal moment in European history not only amongst the young people who participate, but more widely amongst those who attend the performance and follow the project through our online documentaries.”

The performance will take place on Friday 7 June between 18.25 – 18.55 on Southsea Common in Portsmouth. For those unable to attend, the project has been documented via James Olsen’s YouTube channel at https://www.youtube.com/channel/UCo-bQGZtiFhX5SbnjrEdbmw.

The Royal Alfred Seafarers’ Society has a proud seafaring heritage after being founded in 1865 under Royal Charter with the HRH The Princess Royal currently serving as the charity’s patron. The Society’s seminal aim was to provide support for ‘worn-out and disabled seamen’ and it has since delivered an outstanding level of care to former naval officers, merchant navy personnel, veterans and their dependents for more than 150 years.

To find out more about the work of The Royal Alfred Seafarers’ Society please visit its new website at www.royalalfredseafarers.co.uk. To keep up to date with the latest news from the Society, follow and like the official Society Twitter (@RAseafarers) and Facebook pages.