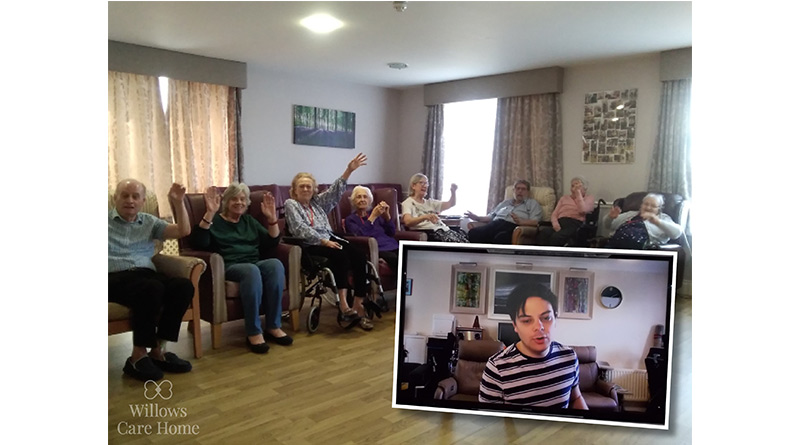 Singer and song-writer Robert Jerome is a great favourite among residents of Willows Care Home. So when the recent lockdown prevented him from visiting in person, much to the disappointment of his fans at Willows, Robert saved the day by visiting virtually, via a direct link from his living room to the care home lounge.

To residents’ delight, Robert sang all the classics – from 1950s icons Dean Martin and Perry Como to the more contemporary Robbie Williams and Michael Bublé. They were soon clapping and toe-tapping along to the music and some even got up to dance.

“Robert’s singing went down really well, as usual. The residents thoroughly enjoyed it even though he wasn’t with us in person. So we’re planning future entertainment, via YouTube, with him,” says home manager Claudia Ramsamy.

Robert, a former X Factor contestant who’s been performing for 14 years in care homes, restaurants, hotels and clubs, varies the tempo of his song set to keep his audience engaged. He also throws in a smattering of his own compositions – he’s been writing his own pop ballads since the age of 11.

“It’s important to vary the music to suit everyone. People with dementia seem to prefer songs that get them up and dancing,” he says. “We all know that music is important for bringing back memories, and that’s also important to the residents.”

He acknowledges that playing to an audience from one’s own living room is certainly different – but enjoyable – and you can still get feedback from your audience. “Performing from home is less formal and can also be reassuring for residents. As a musician you just have to be spontaneous and adapt to changing circumstances.”