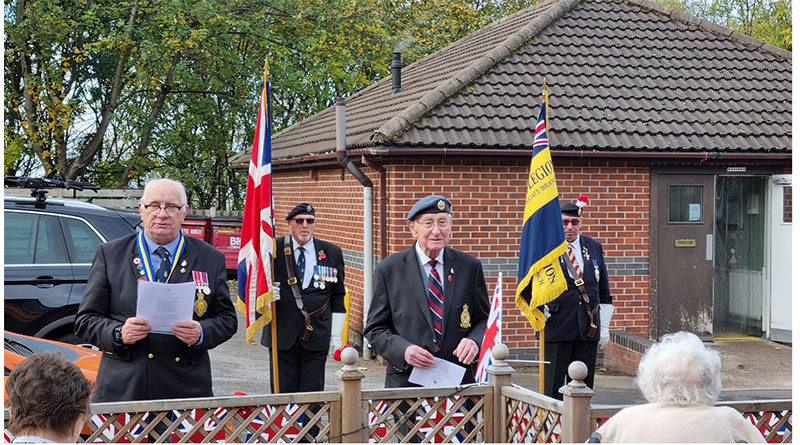 The residents of the Moorgate Care Village in Rotherham had a reflective and respectful Armistice Day, when they were visited by volunteers from the Royal British Legion.

The homes, on Nightingale Close, was given a personal Remembrance service by the local Rotherham Royal British Legion. The Last Post was played, and a two-minute silence was held to allow the residents to honour lost loved ones from the Forces.

The event was held at the home, so that staff and residents who could not attend the Legion’s main service would not miss out on the community’s remembrance proceedings.

Sam Sheppard, Operation Coordinator at Park Lane Healthcare, said: “It was very kind of the Royal British Legion to come to visit us here. Many of our residents were concerned that they wouldn’t be able to formally mark Remembrance Day this year, an anniversary which is close to many of their hearts.

“We would like to say thank you to the Royal British Legion volunteers for making it such a special event for us.”

Barbara Pilkington, 87, a resident at Moorgate Care Village, said: “Remembrance Day is very important to us, and many of us were worried we wouldn’t get to attend due to the restrictions. It was so kind of the volunteers to come here and bring the service to us.”

Ronald William Moffett MBE, CYO & CRO South & West Yorkshire The Royal British Legion, said: “Thank you to the Moorgate Care Village for inviting us to their Armistice Day service in our Centenary Year.

“It is a pleasure to give the residents a small service as an act of remembrance.

“Every poppy counts, and we’re delighted to visit our community when we can.”