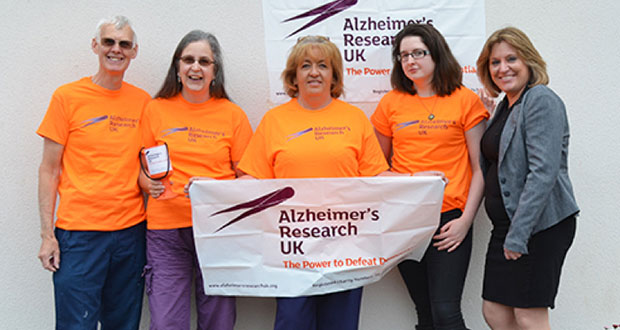 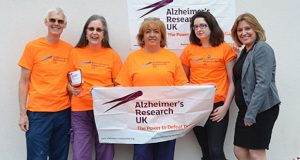 Fundraisers in Rhyl have come together to form a new group to support Alzheimer’s Research UK, the UK’s leading dementia research charity.

The group, formed by local residents Claire and Roger Burman, will be the first of its kind in North Wales and they are now seeking members from the area to help them in their mission to boost funds for vital dementia research.

Claire Burman, the group’s secretary, was inspired to get involved after seeing a close family friend battle with Alzheimer’s. She said:

“Alzheimer’s is such a cruel disease; it takes away the whole essence of the individual. Their character is stripped away long before their body. It doesn’t just affect the person diagnosed, but everyone who knows and cares for them. I’ve seen first-hand what this disease can do which is why I am delighted to support such a good cause.”

Alzheimer’s Research UK regional groups play a crucial part in the fight against dementia, which currently affects more than 1,500 people in Denbighshire alone. Members get involved in a variety of ways, getting stuck into fundraising for pioneering research, representing Alzheimer’s Research UK at events and spreading the word about the charity in their local community.

The group is always looking for new members and hope that people with similar experiences will join them in the fight to defeat the condition. The group has already started their fundraising by organising a series of tombola stalls over the summer, followed by a balloon release at Richmond House, with a quiz and other fundraising events following in the autumn and winter.

Alzheimer’s Research UK powers world class studies focusing on prevention, diagnosis and treatments for dementia. There are 850,000 people living with the condition in the UK and this number is expected to rise to over 1 million by 2025. Alzheimer’s is the most common cause.

“We would like to say a huge thank you to Claire and Roger for setting up this group. We hope people across Rhyl and the surrounding area will come on board to help raise money for pioneering dementia research. The funds raised by the group will bring our scientists ever closer to finding improved forms of diagnosis, prevention and much-needed new treatments for Alzheimer’s disease and other forms of dementia.

“There are over 43,500 people in Wales who are currently living with dementia. Research has the power to defeat the condition and Alzheimer’s Research UK is leading the charge. We rely on our supporters to be able to fund our research, and it’s thanks to the commitment of our regional groups that we’re able to continue our crucial work, driving the next breakthrough.”

Anyone wishing to get involved in the group, or donate tombola prizes, can contact them by emailing arukrhyl@gmail.com or call Zoe Baggott on 07469 852501. For further information about Alzheimer’s Research UK, or to find out more about fundraising for the charity, call 0300 111 5555 or visit www.alzheimersresearchuk.org