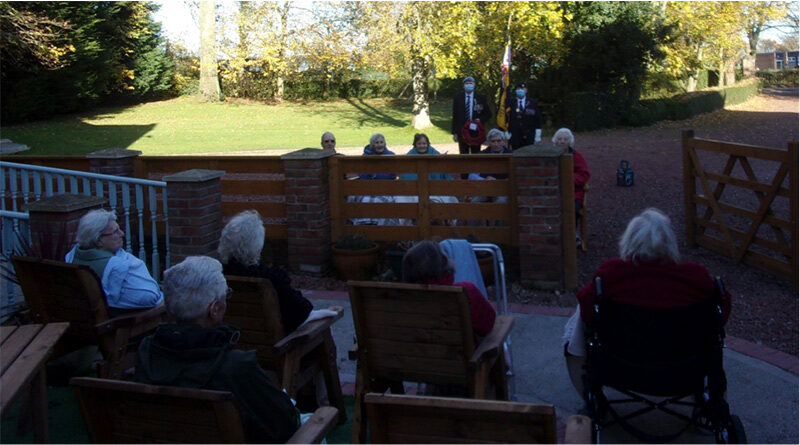 Remembrance Day came early for the residents of Manor House care home in Little Weighton as they were visited by volunteers from the Royal British Legion.

The home, based on White Gap Road, was called on by the local Cottingham Royal British Legion. The Last Post was played, and a two-minute silence was held to allow the residents to honour lost loved ones from the forces. The Legion also brought a wreath for the veterans at the home to sign in time for it to be laid at Cottingham war memorial on Remembrance Day.

The event was held at a social distance this year due to COVID-19, but staff and residents did not want the pandemic to prevent them from taking part in the community’s remembrance proceedings.

Leanne Hatch, home manager at Manor House, said: “It was very kind of the Royal British Legion to come to visit us here at Manor House. Many of our residents were concerned that they wouldn’t be able to formally mark Remembrance Day this year, an anniversary which is personally close to many of their hearts.

“We would like to say thank you to the Royal British Legion volunteers for making it such a special event for us.”

Audrey Yeaman, 80, a resident at Manor House, said: “Remembering the members and veterans of the British Armed Forces is very important, and it was brilliant to meet with the British Legion volunteers, even though everything was socially distanced.”

Major Gary Fraser (Retd)AAC, RBL secretary, said: “The residents were brought out to watch myself and Major Jerry Cross RLC, standard bearer and chairman of Cottingham RBL say the Exhortation, play the Last Post, observe a two minutes silence and lay a wreath. It was quite cold, so we started as soon as possible. Full Covid-19 measures were taken to ensure the safety of the residents.

“The wreath was laid at the Cottingham memorial on the 11th November. We hope that everyone had the opportunity to mark remembrance in their own way and it was a pleasure to do this for them.”