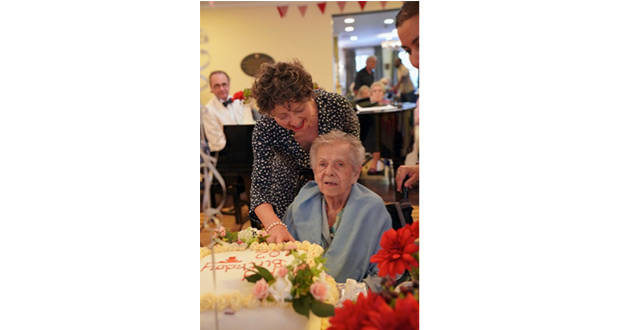 Veterans are helping raise money for the charity caring for them by designing Christmas cards.

‘Winter Robin’ and ‘Christmas Tree’ cards are among the 12 designs being sold by Royal Star & Garter this year.

The Robin was painted by talented artist Dick Jahn, who served his National Service in the Corps of Royal Electrical and Mechanical Engineers (REME) after the Second World War.

The Christmas Tree was created by Marjorie ‘Johnnie’ Steiner, a nurse during the Second World War, whose husband Peter served in the RAF. Johnnie died in July, aged of 102.

Johnnie was a resident at the Surbiton Home for five years. Her husband, who passed away in 2015, was also a resident. Daughter Vicky Peirson said she was “overwhelmed” to see her mother’s card on sale. “The family are delighted. It’s a simple design which sums her up – very uncomplicated and calm,” she said. “Royal Star & Garter was a home from home for my parents, and Mum often referred to it as home. I think they thought they had moved into a five-star hotel! It took away all the anxiety away from us as a family. It was lovely.”

Dick, 92, spends much of his time in the Activities Room at the Surbiton Home. The Winter Robin is one of several artworks he has painted at the Home, and is one of the charity’s bestsellers for 2019.

Royal Star & Garter provides loving, compassionate care for veterans and their partners living with disability or dementia from Homes in Solihull, Surbiton and High Wycombe.

To buy the residents’ cards and others from the charity’s 2019 Christmas catalogue, go to https://www.charitycardsonline.com/starandgarter or call 01934 522920.