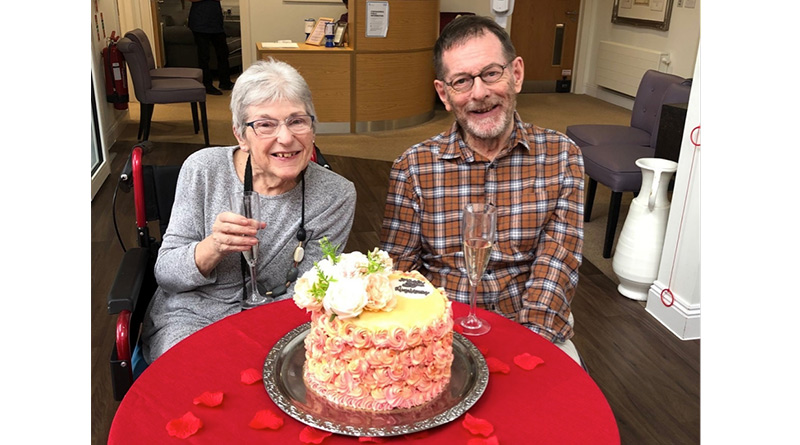 The team at Gracewell of Camberley worked alongside Paul and Rosie’s family to organise a virtual celebration. They enjoyed prosecco and an afternoon tea together in the home’s bistro. The in-house dining team also prepared a wonderful decorated cake for them. Both their daughters, granddaughters and other family members were on facetime to celebrate with them.

The team ensured they were set up with a large TV and decorated the room with balloons so that their special day could still be celebrated properly. Paul and Rosie’s family also made a lovely montage of some wonderful memories and organised for the couple’s friends to pre-record video messages that were played to them.

Paul and Rosie Rowan, who are both in their 70s, have been married for 50 years. They got to know each other through their membership of a local boat club in their home country of Ireland and enjoyed regularly socialising there.

They met in the 1960s and married in 1970, some of their most treasured memories were spent travelling the world together, exploring new countries and meeting incredible people along the way.

Paul and Rosie now live together as residents at Gracewell of Camberley, they have more time now to pursue their hobbies and interests. The couple say that at Gracewell, “there is always something to do and people to talk to” and that their lives “are quite different as we have no chores and no responsibilities”.

When asked about what the key to her long and happy marriage with Paul was, Rosie said that she has “no idea, luck of the draw, but love and respect for each other helps.”

The couple would usually be regularly visited by their children and grandchildren. However, thanks to technology they have been able to maintain their regular catch ups with their family through video calls.

“Paul and Rosie are a wonderful couple; they were delighted with their celebration. The huge smiles on their faces said it all. Their family were also so grateful to be able to join them – virtually – in celebrating this wonderful occasion. Thank you to all the Gracewell of Camberley team who ensured this was able to go ahead!”