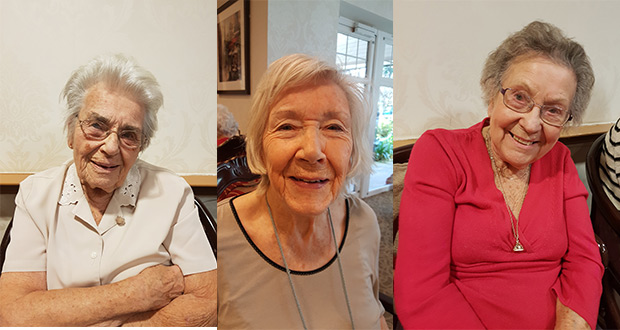 Three residents at Sunrise of Southbourne, on Belle Vue Road, are marking this year’s Remembrance Day by reminiscing about their time during WWII.

The community, which provides high quality, personalised dementia care and assisted living, has created a special display featuring amazing photos of Norma Bebbington at age 20, Joann Milton at age 21 and Josie Butler at 17, all taken during their time working in the war.

Norma shared her story of her work as a Corporal in the Auxiliary Territorial Service (ATS), the women’s branch of the British Army. With a role in accounting, Norma remembers being escorted to and from the bank with all the money she was responsible for. She was soon billeted to a home in Norwich, where she lived with a family who had two children. With time for some fun, Norma was taken to local dances by her American boyfriend who would bring along huge cakes for everyone to enjoy.

Josie started volunteering as a Land Army Girl at just 17 years old, spending 2 and a half years in the role. After being billeted to home near Chichester, Josie drove a tractor on the fields, working the land alongside a group of Italian prisoners of war. Living near an army base with many Americans and Canadians, Josie formed fond memories of all the service people she met. She joined them at local dances and was even taken to visit a submarine, where she discovered the custom of touching a sailor’s collar for luck.

Joann joined the ATS in February 1944 as a Lance Corporal. She was stationed in Barry Island, Wales, but the holiday resort never really felt the same as her home city of Edinburgh. Working in a ticket office, troops would come to Josie to organise their leave before they were deployed abroad. Josie was soon sent to Aldershot in Hampshire where she became a Physical Trainer, teaching the girls in her unit. After being stationed in Liverpool, she kept in contact with a girl stationed in Glasgow so she could feel close to her home city. Although she remained home sick, Joann took part in a host of different work and experiences throughout her time in the ATS.

“We have been truly humbled by Norma, Joann and Josie’s stories, and are honoured that they have shared their experiences with us all at Sunrise of Southbourne.”