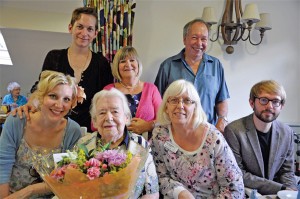 A HAMPSHIRE author and poet whose earliest memory is the night World War One ended has celebrated her 102nd birthday.

Joan Stephens shared her recollections as family and friends gathered for her party at Colten Care’s Belmore Lodge care home in Lymington.

Born in Pennington village in August 1912, Joan was six years old on the day the momentous news came through that the Armistice had been signed, bringing to an end four years of conflict.

The evening of 11 November 1918 saw spontaneous street parties and festivities break out across Britain and France.

“My earliest recollection is being in the High Street in Lymington on that night,” said Joan. “My parents and their friends were there. My father Herbert worked in a solicitors’ officer but he was also a singer and musician. There was a lot of music and it was all jollification. I was with my brother David who was 15 months younger than me and someone gave us a wooden jigsaw as a present. Then I remember people going very quiet as my father gave a speech and asked us to take a moment to remember those who had died. I suppose it was everyone’s first experience of observing a minute’s silence for remembrance of the war.”

Joan, whose maiden name was Tizard, is descended from the Protestant Huguenots who fled France in the 17th and 18th centuries because of religious persecution.

She met her husband Alfred while at school in Lymington and the couple married in 1940.

An active member of the church and Women’s Institute, Joan has written two books about her birthplace, ‘Pennington Remembered – A Pictorial Collection’ and ‘Snippets from a long time ago in Pennington’.

Belmore Lodge Home Manager Chris Dimmick said: “As well as being an author of books, Joan is a gifted poet and can still recite word-perfect poetry and prose. She has an amazing memory and a great sense of humour. She is a truly remarkable lady much loved by everyone here.”

With Joan for her party at the Milford Road home were son Bill, daughter-in-law Muriel, grandsons Neil and Paul, and other family members and friends.