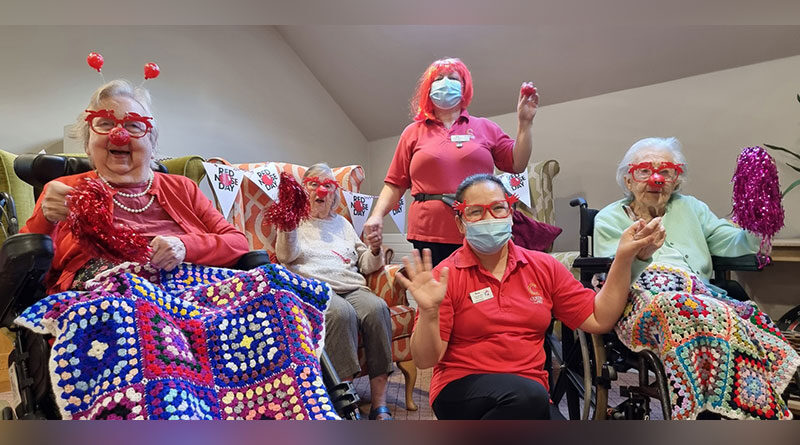 Care home residents and staff in the South let their hair down, dressed up in Red Noses and glasses, donned crazy hats, wigs, feathers and pom poms, and enjoyed lots of games and activities to raise money for Comic Relief.

Amberwood House in Ferndown said hello to a familiar face when Brotherhood of Man singer and former Companionship Team member Nicky Stevens returned to entertain residents and do her bit for the appeal.

Nicky was happy to join in with the dressing-up activities at the Outstanding-rated home and, microphone in hand, even serenaded resident Ray Cox with a rendition of the song Where Did you Get That Hat?. In reply, Ray quipped: ‘I don’t know but it cost too much!’.

At another Outstanding-rated home, Woodpeckers in Brockenhurst, there was a competition to guess the number of balloons making up a giant Red Nose given pride of place in the lounge.

The contest raised more than £70 on its own, prompting resident Frank Coumbe to say: “It was a great way of raising money for Red Nose Day.”

The winner was declared to be Head of Domestics Hanahi Idi who guessed the correct number of 103 balloons and scooped a basket of goodies as his prize.

Across Colten Care, the day delighted new residents as well as those who have participated in charity activities at homes before.

Iris Barnes, who only recently moved to Outstanding-rated Kingfishers in New Milton, Hampshire, said: “It was my first time experiencing Red Nose Day events here at the home. I really liked having fun with the dressing up. I thank everyone for letting me take part in all this for such a wonderful charity campaign.” 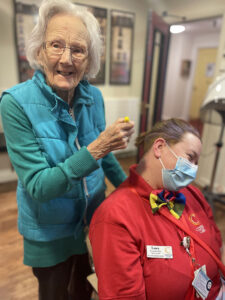 “Doing Laura’s hair reminded me of my mum doing my hair when I was a child. It was great fun.”

Colten Care Operations Director Elaine Farrer said: “Our residents and team members don’t tend to need much excuse to dress up and have fun. We are always delighted when Red Nose Day comes round and we can all get involved and show our support. It’s all about giving vulnerable and disadvantaged people the chance of a better future.”

The fundraising marathon, launched in 1988 and held every two years, supports people in the UK and around the world.

This year, a key focus is encouraging donations to support civilians fleeing the war in Ukraine.