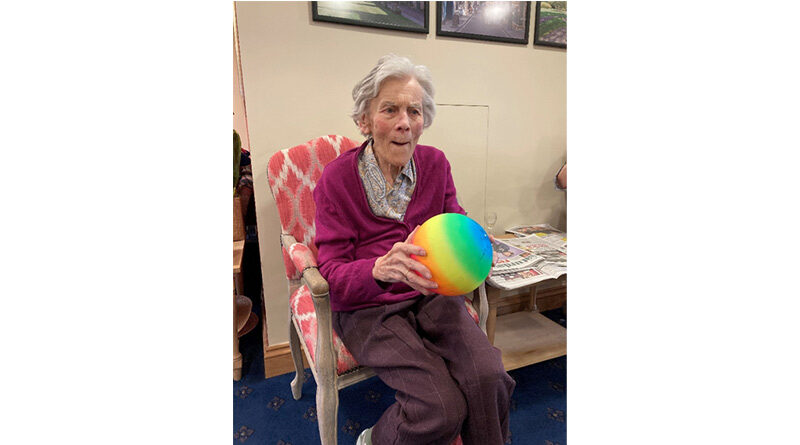 High-scoring basketball fans at a Dorset care home played like champions to honour the memory of Sir Captain Tom Moore.

Around 30 residents and staff at Colten Care’s Abbey View in Sherborne took turns to shoot 100 baskets in aid of chosen charity Future Roots.

The initiative was part of the Captain Tom 100 Challenge set by the family of the famous centenarian after his death earlier this year.

They invited individuals and organisations to choose an activity, repeat it 100 times, and in the process raise money for good causes.

In response, residents and team members at Abbey View set up a basketball net on the floor of the home’s reception area and aimed to shoot 100 hoops in a fun, three-day endeavour.

Chocolates featured among the prizes for those who scored three baskets in a row by throwing a soft ball from across the room.

Resident Beryl Wallis said: “It was lovely to take part in something so different and there was laughter all round as we attempted our throws.”

“We were all very supportive of what Captain Tom did last year and the amazing success he had.

“It was the least we could do to try and emulate some of his spirit while having fun at the same time.”

Clutching her prize of a bag of chocolates, fellow resident and three-in-a-row scorer Jean Pickton-Turbervill said: “I had no idea how good my aim was. Perhaps we should start an Abbey View basketball team!”

This is a farm-based social enterprise that provides mentoring and learning opportunities for young people in Dorset facing tough times.

In the run-up to his 100th birthday last year, war veteran Captain Tom walked a hundred laps of his Bedfordshire village garden to raise money for NHS charities helping the response to the pandemic.

After his initiative went viral and caught the nation’s imagination, he and singer Michael Ball released a version of You’ll Never Walk Alone that made it to the top of the singles charts.

It made Captain Tom the oldest person ever to have a number one hit and in the end he raised nearly £39 million.

Captain Tom died in hospital of pneumonia in February 2021 having tested positive for Covid-19.

This spring, on what would have been his 101st birthday, his family invited people to follow in his footsteps and come up with their own fundraising challenges based around the number 100.