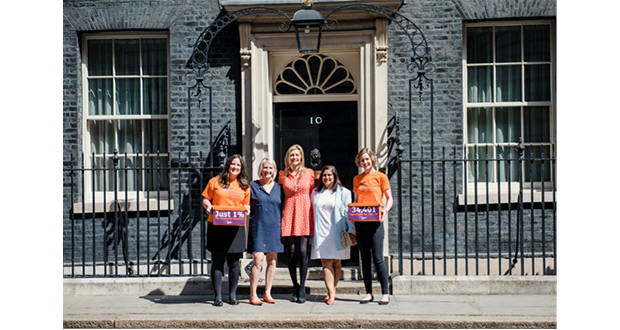 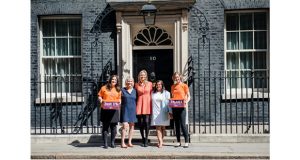 The petition asks the government to put the equivalent of just 1% of the UK’s annual economic cost of dementia towards research each year. Currently £26bn, in just 18 months that cost is predicted to rise to £30bn a year.

Alzheimer’s Research UK has called on the government to scale up research ambition to meet this challenge by funding £320m in dementia research each year by 2025. Government funding for dementia research is currently at £83.1m per year, or 0.3% of the condition’s annual cost, compared to £269m for cancer, which has benefitted from long-term sustained funding to deliver new treatments. After 34,401 people from across the UK signed the petition, Ms Riley joined charity representatives and people affected by dementia to officially deliver this call to Downing Street.

Hilary Evans, Chief Executive of Alzheimer’s Research UK, said:
“Dementia is now the UK’s biggest killer and the cause of heartbreak for families nationwide. The desperate need for a life-changing treatment for dementia will only grow as more people develop the condition. That’s why at Alzheimer’s Research UK we have upped our ambition by pledging an extra £250m for research by 2025 – but researchers need the government to play its part too. To make breakthroughs possible and transform people’s lives, government funding for dementia research must increase in line with the impact of the condition.”

Rachel Riley, who is a committed supporter of Alzheimer’s Research UK, said:
“Long-term, sustained funding for cancer research has helped save more lives and keep more families together. Research can do the same for dementia, and it’s a simple equation: with more funding, scientists will be able to make breakthroughs faster to reduce the impact of dementia. Nearly 1 million people are living with dementia in the UK, and we owe it to them and their families to pick up the pace.”

Carli Pirie lost her grandmother to a rare inherited form of early-onset Alzheimer’s. Her mother is now living with Alzheimer’s, and Carli has a 50% chance of developing the disease herself. She said:
“I believe research has the power to change lives for people with dementia and families like mine. As a volunteer in a research study I’ve seen first-hand how scientists are working to overcome this condition, but studies like this can’t happen without funding. We need research to be backed by substantial government investment so we can end the fear, harm and heartbreak of dementia.”

Shaheen Larrieux is an Alzheimer’s Research UK Champion, who gave up her career to care for her mum who is living with a rare form of dementia. She said:
“Across the country there are thousands of people facing the challenge of providing care for loved ones with dementia, and this challenge won’t go away without treatments. Better treatments would make a huge impact on the lives of people with dementia, their loved ones and their carers, but we won’t get those without investment in research. We need the government to hear this call and commit to funding more research into dementia.”