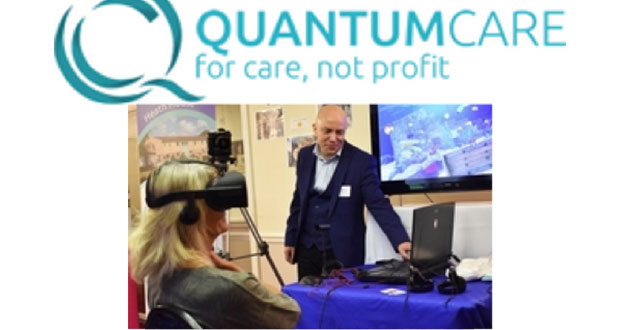 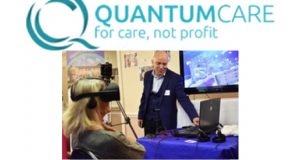 On Wednesday 3rd May 2017, Quantum Care hosted an event for professionals and service providers in the local community, to learn about the latest technological innovation for people living with dementia, as featured in the Sunday Times.

Heath House in Bushey Heath is one of the first care homes in the world to feature the new virtual reality technology for people living with dementia. The system ‘VirtuCare’ is a range of relaxing and nostalgic virtual reality experiences developed by Tribemix Limited, an organisation that specialises in virtual reality and augmented reality.

Hertfordshire based care home and day care services provider Quantum Care was invited to embark on a joint project less than a year ago by virtual reality specialists Tribemix Limited. The project’s main objective was to see whether virtual reality could improve the well-being of people living with dementia.

Quantum Care residents gave their consent to take part in the project that initially started with residents living at Belmont View in Hoddesdon, before being rolled out to a further four Quantum Care homes in Hertfordshire including Heath House.

Residents are closely monitored and observations are recorded before, during and after the experience.  One important stipulation is that residents’ ‘key’ care worker must be present to distinguish the change in behaviours from how the resident usually communicates both physically and emotionally. Carers look at a resident’s body language, facial expressions, speech and reminiscence engagement to determine their wellbeing. In addition, residents have five psychological needs that carers aim to meet and indications that this has been achieved are also looked for. These needs are: comfort, inclusion, attachment, identity, occupation. Quantum Care has also used the ‘Abbey Pain System’ for assessing the well-being of patients before, during and after the virtual reality sessions. The outcomes of all observations have been 100% positive, and carers have noticed a big difference in the behaviours of the residents in all five Quantum Care homes.

On-going trials demonstrate the benefits of this technology in terms of increased well-being, reduction in anxiety levels and a significant rise in stimulation and interaction. ’VirtuCare’ was initially created by Tribemix to help people living with dementia. The project is now broadening to encompass a range of patient types from paediatrics, respiratory disorders, physical disabilities and elderly care.

As with any form of therapy, virtual reality is not suitable for all residents. As such, several measures are in place to ensure that residents taking part are highly likely to benefit from the experience and that the carers leading the session are able to support them if they have a negative response.

The main purpose of the event hosted at Heath House was to showcase the results of the pioneering project to people working in the medical profession as well as other organisations that provide a service in the community to elderly people. All attendees had the chance to experience the series of virtual programmes developed by Tribemix Limited.

During the presentation Managing Director of Tribemix, Alex Smale spoke passionately about how the project between the two organisations first came about, and how the series of virtual reality worlds have been developed following feedback from Quantum Care residents and staff.

“The project began when my elderly neighbours had an accident that stopped them from leaving the house. I thought it would be great to use our virtual reality technology to give them a day out to the beach without the stress of leaving the house. That led to a conversation with Quantum about expanding that idea to their residents. They have been incredibly supportive with the project, helping us to develop it into something that is carefully tailored for people living with dementia. We couldn’t have done it without them.”

Maria Ball, Chief Executive of Quantum Care comments on the project so far;

“It is exciting to see something that we genuinely think will really enhance the welfare, happiness and contentment of our residents.”