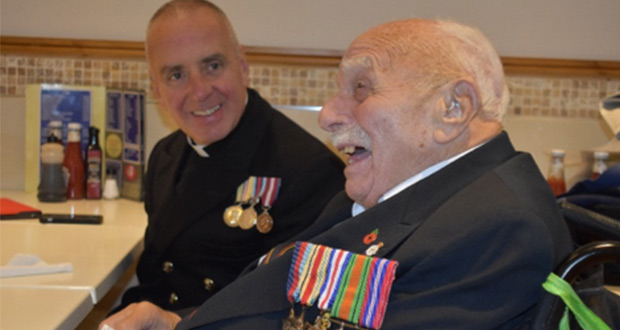 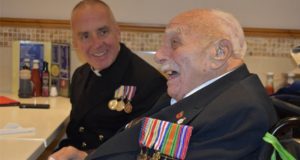 Quantum Care has helped make a 99-year-old World War Two veteran’s dream come true by granting his wish to relive his illustrious naval career as the guest of honour in a visit to Portsmouth Historic Dockyard.

Ernie Searling, a World War Two veteran who served in the Royal Marines, was given the chance to visit the Dockyard by his care home Heath House as part of Quantum Care’s Silver Wishes initiative.

Silver Wishes celebrates 25 years of Quantum Care providing high quality, not-for-profit, care across Hertfordshire with the aim to grant as many wishes to their residents as possible.

Ernie had signed up to the war effort on the 3rd September 1939 – the day that World War Two was declared – and spent a period of this time based in Portsmouth before being sent abroad and then joining the regular forces after the war.

Upon arrival to the docks, and in true VIP fashion, Ernie was given a personal tour around the dockyard, which included viewing HMS Victory and the UK’s newest aircraft carrier, before being given a surprise boat trip around the docks.

After a fish and chip lunch Ernie, dressed in his regimental blazer and medals, ended the day with the presentation of a coveted Blue Beret by The Veteran’s Society, which he will proudly wear during the Armistice Day Parade in London.

“ Ernie was overjoyed to visit Portsmouth again. He served there for a while after World War Two and was so excited to tour the docks and get the chance to go on a boat trip. He enjoyed it so much and won’t stop talking about the day.

I would like to thank the staff at Quantum Care for arranging the trip – the staff there were absolutely wonderful from start to finish, going the extra mile to make the day special.

“ It was an absolute delight to be able to make Ernie’s wish come true and accompany him on this trip. Seeing him able to relive his naval career, and especially his joy at going out to sea again made everything worthwhile. He was treated like a rock star by the staff at the docks and the public – many of whom came to shake his hand and thank him for his service.

“We would like to thank Portsmouth Historical Dockyard, the Veteran’s Society and Royal Navy Chaplain Keith Robus for helping us to make the day a success.

The aim now is to make more wishes come true for more of our residents as part of our Silver Wishes initiative. Our residents have asked for everything from a hot air balloon trip to meeting Barry Manilow and we would love to make even the most ambitious wish come true.”

Anyone who would like to help make a resident’s dream come true is encouraged to contact Quantum Care on 01707 393293. Silver Wishes for Fosse House can be viewed on Facebook – search for “Fosse House Silver Wishes”.