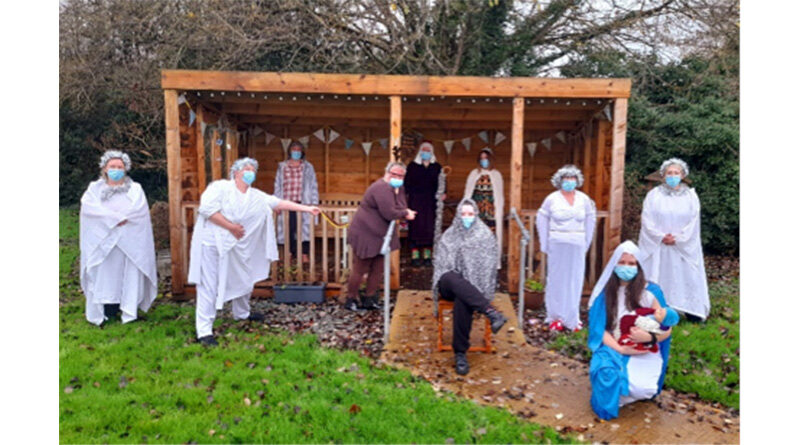 Staff at a care home in Welshpool were so determined to give their residents a wonderful Christmas this year, despite the on-going pandemic, that a group of carers got together and wrote and acted out their own version of the Nativity.

We all know that Christmas is going to be somewhat different this year, but the team at Llys Hafren care home pulled out all the stops to ensure their residents and their families make the best of the festive season.

“It has been such a challenging year for everyone, but particularly for care home residents and their families, so we really wanted to make Christmas time as enjoyable as possible,” said home manager, Bea Wickstead. “We know how difficult it has been with visiting restrictions and changes to everyone’s routines, but knew that if we all pulled together, everyone could still have an enjoyable time.”

Celebrations kicked off with a virtual Christmas Fayre on the 27th November, where friends and families joined via video conferencing app, Zoom, and purchased Christmas gifts and treats from stalls manned by staff, while residents browsed the goods and enjoyed mince pies and mulled wine. Staff were in festive fancy dress and there was also visit from the main man himself – Santa.

The Mayor of Welshpool, Cllr David Senior, joined the event virtually to offer a Christmas message to residents and staff, along with Alun Thomas, Chairman of Shaw healthcare, which operates the home on behalf of Powys County Council. Mr Thomas echoed the thoughts of the Mayor and expressed his gratitude to the staff for all their hard work this year.

The annual Llys Hafren carol service will still take place on the 23rd December, albeit virtually, but the event everyone has been looking forward to was the staff nativity play, held on the 18th December.

Written by activities coordinator Linzi Isaac, the nativity play was adapted to include a number of landmarks in Welshpool and rooms in the home, including the ‘Bee Hive’ – the home’s outdoor garden area – as the stable.

Llys Hafren resident, Peter Morgan, who turned 84 at the end of November, was one of the first to congratulate the team on the “lovely” performance, while a district nurse – who happened to be visiting at the time – said she couldn’t have chosen a better time to be at the home.

Mr Morgan was the ideal critic, having made his TV debut earlier this year in an advert screened as part of the Welsh Government’s We Care Wales campaign, to promote the benefits of a career in social care.