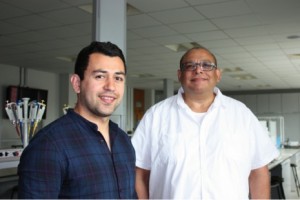 A team of dementia researchers at the University of Portsmouth has received a funding boost of almost £50,000 for a pioneering study into how Alzheimer’s disease affects the gut. The funding has been awarded by Alzheimer’s Research UK, the UK’s leading dementia research charity, and will see Dr Mohsen Seifi and Dr Jerome Swinny embark on a 21-month project, kicking off this month.

Alzheimer’s disease is the most common cause of dementia, a condition associated with memory and communications problems, confusion and difficulty with day-to-day tasks. Dementia is fast becoming the UK’s greatest medical challenge, affecting 850,000 people in the UK including almost 20,000 people in Hampshire alone. When asked what dementia is, the majority of the public cite memory loss as a symptom but very few are able to name other symptoms of the condition such as intestinal problems.

Dr Swinny, Senior Lecturer at the School of Pharmacy and Biomedical Sciences and the principal investigator on the award, said:

“Alzheimer’s affects people in many different ways and everyone’s experience of the disease is different. Many people associate memory loss with Alzheimer’s, but some of the often overlooked physical symptoms of the disease such as incontinence and constipation can also take a huge negative toll on someone’s quality of life. Intestinal problems can limit how comfortable people feel leaving the house, restricting the social opportunities available to those with dementia and their carers.”

The Portsmouth team will use their new funding to explore the biology driving these distressing symptoms of Alzheimer’s. They aim to provide clues to how the symptoms could be managed to improve the lives of those affected.

Dr Seifi, whose original discoveries as a PhD student in Dr Swinny’s lab paved the way for this project, said:

“The same kinds of cells that send signals across the brain to control how we think, feel and behave also control the physical activity of the gut. This activity helps to breakdown and digest food, as well as control when we go to the toilet. We believe that some of the same damaging changes that happen to nerve cells in the brain in Alzheimer’s disease may also happen in nerve cells in the gut, including the build-up of two hallmark proteins called amyloid and tau. This funding boost will allow us to delve deeper into the biology of these symptoms and why they occur. We’re really grateful to Alzheimer’s Research UK and their supporters for making this research possible.”

The team will study the process using mice bred to show hallmark changes associated with Alzheimer’s, comparing the activity of their gut to healthy mice to understand what changes happen in the intestine in the disease. They will study how well the gut is working, as well as investigating some of the molecular changes in cells in the intestine in the mice with features of Alzheimer’s. Dr Swinny believes that Alzheimer’s changes in intestinal nerve cells could alter levels of important proteins, disrupting the signals that are sent to gut cells to allow them to work properly.

“Dementia affects people in so many different ways and understanding the symptoms and why they occur is incredibly important. Little is known about the biological mechanisms underpinning intestinal symptoms in Alzheimer’s and understanding these symptoms – why they occur and how they can be better managed – is important. It could not only help to improve the wellbeing of those with dementia but also lessen their care needs meaning that those around them can have more quality time to focus on the individual. By deciphering the causes of these symptoms in mice, we hope this important Pilot Project will form the basis for further studies in people and act as a platform for detailed investigations into how these symptoms could be treated more effectively.”