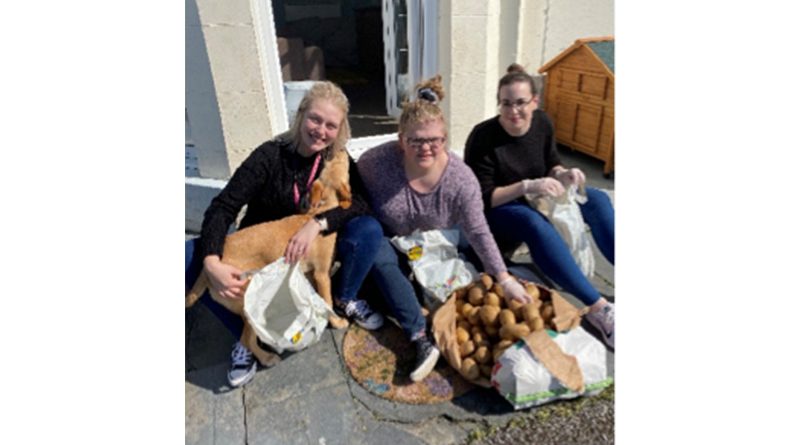 Staff at a care facility for young adults in Plymouth are preparing for the possibility they may have to “move in” to the service, in order to guarantee support for residents.

Care workers at Bull Point, which is a specialist provider of residential services for people with an autistic spectrum disorder, are preparing for potential lockdown or period of quarantine, by taking suitcases to work.

Caroline Heath, deputy manager of Bull Point, said: “The support we have received from staff is completely overwhelming and everyone has stepped up to the plate without a second thought. Everyone is so dedicated to their job and I’d like to thank everyone from the bottom of my heart.”

Bull Point has also been overwhelmed by the support it has received from local businesses following the outbreak of COVID-19.

Local businesses have also been lending a hand, including The Nearly Naked Veg Company which dropped off a huge delivery of potatoes, other fresh veg and even some dairy products to the facility.

Caroline Heath, continued: “At times like these, we have to pull together as a community. Simple things like the deliveries from The Nearly Naked Veg Company mean so much to us because it means that we have more time to spend looking after our service users instead of having to rush to the shops! Their kindness won’t be forgotten!”

The Nearly Naked Veg Company has also offered its services to other facilities in the Salutem group, which operates Bull Point, to ensure staff can dedicate their time to caring for the service uses instead of queuing at local supermarkets for hours on end.

Caroline Heath has also been helping to ‘feed the 5000’ and has ensure that several of the Salutem facilities, not just her own, have enough food and supplies after supermarket panic buyers left some of the services struggling for fresh produce.

Caroline’s manager, Sharon Field, manager of Bull Point, said: “My Deputy Caroline took on the role of feeding the 5000, getting lists from other services and ordering food, even going out shopping for other services that cannot easily go to several shops.

“She ordered fruit, veg and meat from local farmers and butchers who she even managed to get them to deliver to outside their area to other services!

“She also managed to source some essential items that were out of stock everywhere for services that were really affected, everyone has been very grateful.”

Bull Point has recently been rated overall “Good” in the CQC’s latest report, with the care provision, described as ‘exceptional’, receiving an “Outstanding” rating.