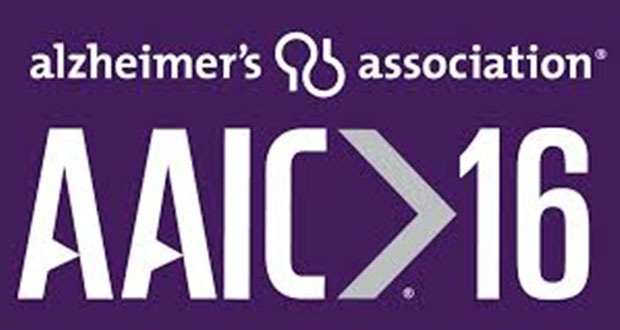 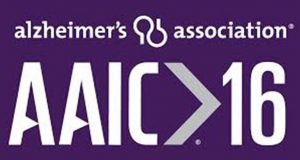 At AAIC2016, researchers from TauRx Therapeutics Ltd presented results from a phase III clinical trial of the drug leuco-methylthioninium-bis(hydromethanesulfonate) or LMTM in people with mild-to-moderate Alzheimer’s disease.

LMTM is a second generation drug aimed at blocking the build-up of tau protein in Alzheimer’s, improved from an earlier version called Rember. The drug, given twice daily as a pill, is based on the structure of a chemical called methylene blue, used as a dye in research and to aid surgery.

Initial results presented at the conference today reported data from a clinical trial of 891 people with mild-to-moderate Alzheimer’s, randomised to either a placebo (8mg of LMTM), 150mg or 250mg of the drug. As the drug causes blue discolouration of urine, the placebo group required a low dose of drug to maintain the blinding of the trial.

Overall, the trial failed to meet its primary endpoints of a slowing decline in memory and thinking, and function on a scoring test of aspects of day-to-day living.

The researchers then completed a secondary analysis of 15% of patients (136), who were not already taking an approved Alzheimer’s drug, so received LMTM as a monotherapy. In this group, of which 34 people were given placebo, 26 received 150mg LMTM and 25 were given 250mg, the researchers observed:

The dropout rate for the clinical trial was 31% and the side effects reported included diarrhea and dysuria – pain when passing urine.

“The idea that a drug based on a common blue dye could target one of the key processes driving Alzheimer’s was suggested well over ten years ago, so it’s positive to see LMTM being tested in people. The build-up of abnormal tau in nerve cells is a hallmark of Alzheimer’s and several other dementias, so there has been much hope about what potential benefit a drug against this process could bring for people with dementia.

“It’s disappointing that the main trial did not meet its primary endpoints, which are important pre-defined goals of a study that allow the most robust conclusions to be drawn. A silver lining appears to be some encouraging signals from people who took LMTM as a monotherapy, but it’s hard to draw firm conclusions from the small numbers of people in this group. In the 15% of people who were taking LMTM alone, there were marked benefits on day-to-day function as well as memory and thinking which must be explored further. Despite a lack of clarity around exactly how LMTM targets tau, the promising observation that those treated with the drug as a monotherapy showed reduced brain shrinkage provides evidence that the drug may act on the disease process. The striking observation that LMTM doesn’t benefit those taking existing Alzheimer’s medication is difficult to explain and needs investigation, to shed more light on exactly how the LMTM is working in the body.

“While today’s announcement marks an important step in the evolution of Alzheimer’s clinical trials, we must be cautious in our interpretation until questions raised by the trial have been explored further. The positive findings will need to be confirmed in the second ongoing phase III trial before it’s possible to assess whether LMTM as a monotherapy could provide more benefit to patients that current Alzheimer’s drugs.”