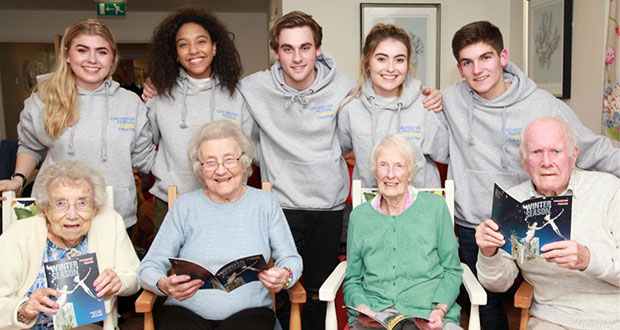 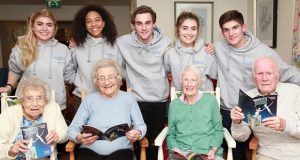 Five cast members from Chichester Festival Youth Theatre’s Christmas production of the classic tale brought songs and scenes to life in an intimate, preview performance at nearby Wellington Grange.

In a question and answer session with residents, Youth Theatre Manager Lauren Grant joined the actors to talk about aspects of the show including how flight scenes are staged.

Among the performers was Darcy Collins who, aside from playing Tinker Bell, is a part-time waitress at the Colten Care home.

Emily Hudson, who works alongside Darcy’s mum Shari Miles as an Activities Organiser, said: “It was lovely for our residents to see Darcy in a completely different light. Also, at the question and answer session, the cast cited the opportunity to perform as their main motivation to join the youth theatre. That definitely chimed with those residents who were in youth theatre themselves. In a one-to-one chat with a member of the cast, one of our residents said how nice it was to hear that the ambition he had when younger was exactly the same as for budding actors today.”

Vicky Gregory, Corporate Manager at Chichester Festival Theatre, said: “The cast really enjoyed performing at Wellington Grange and meeting the residents, some of whom might not be physically able to go to the theatre itself very easily. What an ideal chance to visit them in their home and sprinkle a little magic dust from the show.”

The visit was the second exclusive performance at Wellington Grange under a partnership between Colten Care and Chichester Festival Theatre designed to bring interactive theatre experiences directly into the home.

In August, cast members from the musical comedy Half A Sixpence visited the home to sing and enact scenes. Head of Wardrobe Melody Wood also gave a talk for residents about the theatre’s autumn Shakespeare productions.

Residents are now looking forward to a specially arranged minibus trip and VIP backstage tour at the theatre in January.