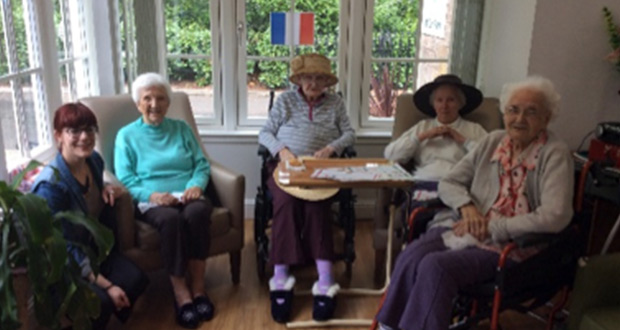 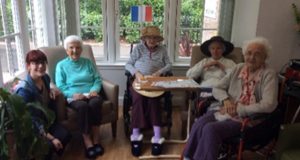 Balhousie Ruthven Towers Care Home in Auchterader has been working with social enterprise Lingo Flamingo to offer French classes to residents in a bid to help delay the symptoms of dementia.

It is believed that speaking multiple languages can delay the onset of dementia by up to five years. The tailored sessions help residents with early forms of dementia to improve communication, cognitive development and inter-personal skills, as well as build their confidence.

Residents at the Perthshire care home have just finished a ten-week French workshop, taking part in a range of activities including music sessions, word association and learned memory techniques.

“Lingo Flamingo’s foreign language workshops have proved very popular with our residents and the benefits have been amazing to see. Residents that were quite disengaged at the beginning became fully engaged by the end of the ten-weeks. We have residents that are counting in French and even singing the French national anthem! It is fantastic to see how they respond to the activities and the enjoyment they get out of every session.”

With 7.7m people worldwide diagnosed with dementia each year, projects such as this can prove vital to the delaying the symptoms of dementia and improving the wellbeing of those living with the disease. Yvonne Manson, Balhousie Care Group dementia consultant, explained why projects like this are so important:

“A recent study highlighted the positive effects of learning a second language, which is said to delay some symptoms of dementia by up to five years. Living with dementia can often be a very isolating and frightening time. Projects such as this are not designed to make residents fluent in a foreign language, but aim to engage resident’s brains, enables them to enjoy social interaction with other residents and perhaps evoke memories of past trips abroad.”

Balhousie first began working with Lingo Flamingo last year at their Wheatlands Care Home in Bonnybridge and the success of the partnership has prompted them to introduce it into other homes within the group. The project was also recognised at last year’s Scottish Dementia Awards as a finalist in the ‘Most Innovative Partnership’ category.